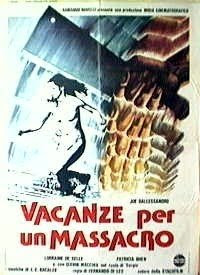 ...aka: Holiday Massacre
...aka: Madness
...aka: Vacation for a Massacre

Director Fernando Di Leo is best known to us horror nuts for SLAUGHTER HOTEL (1971), a sleazy "giallo" that forgets to be thrilling or horrific and instead concentrates mainly on getting its female cast members naked during gratuitous lesbian and solo sex scenes. This one (which I saw under the title HOLIDAY MASSACRE) is his third foray into the horror/thriller genre and basically follows the same exact formula, cramming as much nudity in as possible but seemingly forgetting about everything else. Ostensibly a thriller taking it's cue from Wes Craven's THE LAST HOUSE ON THE LEFT (which influenced many concurrent Italian/Euro exploitation films), all this really is is an excuse to have lead actress Lorraine De Selle (from the somewhat similar HOUSE ON THE EDGE OF THE PARK) parade around nude for about 85 minutes. Naturally, if you're a Lorraine fan you'll probably enjoy this for what it is, but if you're going in expecting an actual thriller or horror film you will likely walk away pretty disappointed.
Convicted thief and murderer Joe Brezzi (Joe Dallesandro) escapes from prison, murders a man with a pitchfork, steals his car and then heads off to find 300 million lira he'd stolen and hid in a secluded vacation home right before he was arrested. Before he can get inside and get the loot (which is hidden underneath the fireplace), married couple Sergio (Gianni Macchia) and Liliana (Patrizia Behn) show up looking for a little weekend R&R. Also tagging along is Liliana's self-absorbed and bitchy younger sister Paola (De Selle), who is secretly having an affair with Sergio. That evening there's a lengthy sex scene for the couple (and a solo effort from Ms. De Selle on the couch), as Joe patiently waits outside. The next day, Sergio goes hunting, Liliana goes into town get some groceries and Paola decides to stay behind to sunbathe (topless, of course). Joe strikes when the getting's good, knocks out Paola and starts chipping away at the fireplace with a pick axe. When Paola comes to, she's "raped" (well, it starts as a rape...) and then her sister and brother-in-law show up for more of the same.
A pretty low-budget affair, with minimal location change, minimal action and a very small cast, this one lacks suspense and tension and isn't nearly nasty or violent enough to be worth recommending. Dallesandro is the only one who manages to keep his clothes on the entire time (even during the rape scene) and basically coasts through this entire film with an annoying "angered" looking facial expression. Another constant annoyance is a huge poster of John Travolta's grinning mug hanging on a wall in the room where most of the film takes place. And despite the title there really is no "massacre" aside from a little rifle shooting at the very end.
★★
Posted by The Bloody Pit of Horror at 3:27 PM