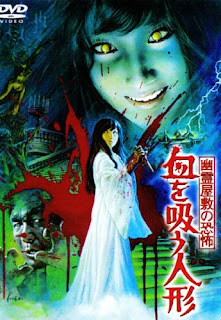 ...aka: Bloodsucking Doll
...aka: Chi o suu ningyô
...aka: Fear of the Ghost House
...aka: Ghost Mansion's Horror, The
...aka: Night of the Vampire, The
...aka: Vampire Doll, The
Directed by:
Michio Yamamoto
Kazuhiko Sagawa (Atsuo Nakamura) met and fell in love with Yuko (Yukiko Kobayashi) while in Tokyo, but had to go abroad for six months on business. When he returns, he decides to go to Yuko's secluded country home in a small village called Tadeshina to pay her a visit. Almost immediately upon arriving, strange things begin to happen. The creepy, near-deaf servant Genzo (Kaku Takashina) attacks him right after he enters the door, but is called off by Yuko's mother, Mrs. Nonomura (Yôko Minakaze), who promptly informs him that just two weeks earlier Yuko was tragically killed when her car got caught in a landslide. She still offers up her home for him to stay in and he agrees. That night, Kazuhiko hears something coming from Yuko's room, goes to investigate and finds Yuko standing in the closet. He's knocked out by someone, and the next day the mother claims he must had fainted and dreamt it all. The following evening Kazuhiko looks out his window and sees Yuko. He follows her into the woods and to the family graveyard. When he catches sight of her, she's ghostly white and ice cold, and pleads "Please kill me..." Instead, he's the one to end up dying when she reveals a set of green cat eyes and then sinks a knife into his back.
A week later, Kazuhiko's sister Keiko (gorgeous Kayo Matsuo) becomes worried because she hasn't heard from her brother. She and her friend Hiroshi (Akira Nakao) decide to take a trip to Yuko's former residence to look for him, and that's when they discover the home's sordid history, a tragic attack that soiled the family name and of a possible curse. During a visit to the town doctor (Jun Usami), they learn that twenty-years earlier a killer broke into the home and murdered nearly everyone there except for Mrs. Nonomura, who was raped and ended up conceiving a child. That child was Yuko. They were then shunned by the locals and became reclusive. After the car accident, the grief-stricken mother couldn't part with her daughter, and through another means found a way to ensure she could keep Yuko around.
The film is technically well-made, with good cinematography, nicely composed shots, classy art direction inside the Nonomura home and fine performances from the entire cast. Unfortunately, it's also saddled with a confused, needlessly cluttered and muddled screenplay. Yuko seems to be either a vengeance-seeking ghost or a blood-thirsty vampire, but may not be either. So how is she able to return from the grave? There's talk of the mother making a pact with the devil to keep her alive... and then there's talk about the use of hypnosis to keep her in a parallel world between life and death. And she might not even actually be dead; when her grave is excavated, all that's there is a mannequin. The movie waits until the last 20-minutes to start flinging around various ideas about who or what Yuko is, and why she's back from the dead killing people, before finally deciding to settle back into the vengeful ghost mold.
So while it's a pretty good effort overall, it's not quite as good, nor as satisfying, as it could have been, despite fine production values and eerie visions of the pale-faced, green-eyed Yuko popping up from time to time. I saw the 71-minute widescreen cut of the film, which was released as VAMPIRE DOLL. The film was also released in the UK under the misleading title LEGACY OF DRACULA: THE BLOODTHIRSTY DOLL. It was the first film is a three-part series from director Michio Yamamoto (called the "Bloodthirsty Trilogy" by some) and was followed by LAKE OF DRACULA (1971) and EVIL OF DRACULA (1974).
Score: 6 out of 10
Posted by The Bloody Pit of Horror at 3:39 PM