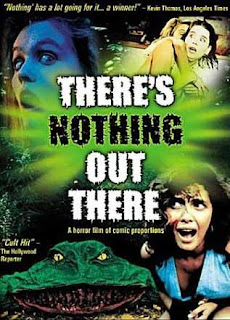 Directed by:
Rolfe Kanefsky
Forget that line of forced horror parodies from the early 80s (while you're at it, forget the horrid SCARY MOVIE franchise as well) and go straight for this very amusing riff on horror films and their endless cliches, which scores plenty of laughs for genre fans while also staying an entertaining monster movie. Horror film fanatic Mike (Craig Peck), who I am convinced was the prototype for Randy in SCREAM ("Name a horror movie, any horror movie..."), travels to a remote cabin with six of his oversexed and/or brainless friends (including Wendy Bednarz from VAMPIRES AND OTHER STEREOTYPES, Mark Collver from Pupi Avati's BIX and Bonnie Bowers, the bassist for the band Bhang). He continually warns them that something is wrong, but in typical horror movie tradition, no one believes him. Before long, a suitably cheesy looking green monster attacks. It possesses people by shooting lasers into their eyes and tries to mate with the women (cue crotch level POV camerawork). While low on budget, this is high on laughs, enthusiasm, imagination and good-natured ribbing. We get plenty of blood, gore and nudity, a car wreck, skinny dipping, some very cool opening credits, horror film references (the best being one to INVASION OF THE BODY SNATCHERS), some great one liners ("Is someone paying you to stand by an open window?") and a hilarious ending.