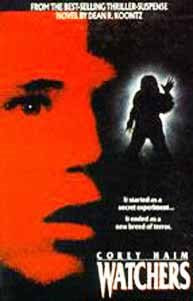 Directed by:
Jon Hess
The same night his girlfriend is attacked by a hairy monster, a troubled kid (Corey Haim) finds a golden retriever has stowed away in the back of his truck. That mutt turns out to be an escapee from a top-secret government lab that blew up (part of the “St. Francis Project”) and is intelligent enough to know who Abraham Lincoln is, retrieve its own hot dogs from a refrigerator and help the kid out with his homework. Haim’s divorced single mom (Barbara Williams) doesn’t really want “Fur Face” around (at least, at first), but a slew of obligatory bad guys (led by the always reliable Michael Ironside, in a surprise role) do. Turns out the monster from the beginning (which is big, orange and likes to suck on human eyeballs) is a genetic twin to the loveable dirty doggie. The story (based on the popular novel by Dean R. Koontz) is pretty routine, but he pooch is fun to watch and this did well enough in theaters and on video to spawn three sequels; WATCHERS II (1990), WATCHERS III (1994) and WATCHERS REBORN (1998). The Artisan/Live DVD release contains the first two films. Look for a young Jason Priestley (a couple of years before Beverly Hills 90210 made him a star) as a kid on a bike.
★★
Posted by The Bloody Pit of Horror at 11:07 PM