Revenge of the Teenage Vixens from Outer Space, The (1985) 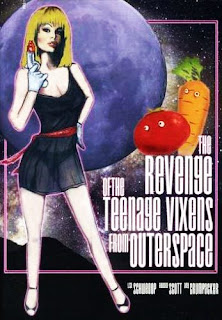 Directed by:
Jeff A. Ferrell
Here’s a good example of a cult attempt actually living up to the fun alluded to in the title! It's a zero budget wonder that somehow manages to muster up more actual entertainment value than most movies with fifty times the money, acting talent and special effects. It was filmed at the Lakeside Upper School, a small private high school in Northern Seattle whose alumni includes Paul Allen and Bill Gates (!), and is more fun to watch than, say, INDEPENDENCE DAY or ALIEN RESURRECTION. The plot concerns four horny, scantily-clad alien babes with feathered hairstyles who come to Earth in search of willing young earth men. They enlist the aid of a skeptical young girl named Karla (Lisa Schwedop) to help coach them in the ways of femme seduction and enroll in the local high school, but find the local male population (including their new teachers) are about as easy to get in the sack as Ron Jeremy. When the guys fail to live up to their high expectations, and the local girls become jealous of their feminine wiles, the spurned extraterrestrials get revenge by using their laser guns to turn their victims into... giant vegetables (which is what they mate with on their home planet!!). VIXENS is so much fun for Z-movie fans (with spirited acting from a cast of unknowns, funny/stilted dialogue and terrible special effects) that it's easy to overlook the fact that it's highly derivative of the 1970s drive-in staple INVASION OF THE BEE GIRLS (1973).

This used to be on regular rotation on USA Up All Night (don't ya miss that show?) but the VHS release through Continental went out of circulation quickly. Apparently, the owners never sold the international rights to the film, but it was released all over the globe (including England, Japan and Spain) anyway. In 2007, a company called Sovereign released it on DVD, complete with a full commentary track by the director and co-writer/producer Michelle Lichter, a partial commentary track with one of the vixens and some bios. Apparently a lot of the actors (who obviously used fake names) want to forget it even exists. Oh well, I enjoyed it.
Score: 6 out of 10
Posted by The Bloody Pit of Horror at 4:04 PM