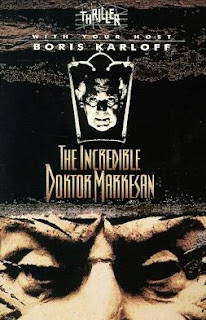 ...aka: Thriller: The Incredible Doktor Markesan
Directed by:
Robert Florey
.
The popular Thriller series hosted by horror legend Boris Karloff ran from Fall 1960 to Spring 1962 on NBC and made an impact on lots of kids during its day, including a young Stephen King, who has called it "the best horror series ever put on TV." Unfortunately, of the 60+ episodes that were made, only six of them were officially released. This, along with "The Grim Reaper," "Masquerade," "The Prediction," "The Premature Burial" and "The Terror in Teakwood" were all issued (separatly) on VHS in 1996 by MCA/Universal. And sadly, that was it. Even though some (bootleg) sites offer the entire series on DVD-R, this has yet to see the legitimate box set release it deserves. "The Incredible Doktor Markesan" (episode 22 of the second season) was based on a story by August Derleth and Mark Schorer and was directed by Robert Florey, who is possibly best known to genre fans for co-scripting the horror masterpiece FRANKENSTEIN (starring Karloff) in 1931. Florey also made his mark on the genre by directing 1932's MURDERS IN THE RUE MORGUE (with Bela Lugosi) and 1946's THE BEAST WITH FIVE FINGERS (with Peter Lorre).
.
Falling on hard times and with just 12 dollars in their pocket, Fred Bancroft (Dick York - "Bewitched") and his wife Molly (Carolyn Kearney) decide to visit Fred's reclusive estranged uncle Konrad Markesan (Karloff), hoping for both a place to stay for a little while and possible connections to finding a new job at the local university where Konrad used to work as a science professor. They arrive at his derelict mansion, with its overgrown front yard and cobweb-strewn interior, and find Konrad looking a little disheveled. He claims he'd just recently returned to the home after a long absence, unsuccessfully tries to pay them to leave and then reluctantly agrees to let them temporarily stay in an upstairs bedroom. The only conditions are that they are to stay locked in their rooms at night, not go into his library and not let anyone know he has returned to his home. Naturally, both Fred and Molly find it rather difficult not to snoop around because of Konrad's strange behavior and the fact they see him sneaking off late at night to a swampland cemetery located behind the house. Turns out Konrad is up to something devious... like using a special serum derived from mold found in graveyards to raise the dead!
.
Most TV programs of the late 50s/early 60s such as The Veil, The Twilight Zone and The Outer Limits teetered on being fantasy, mystery or science fiction much - if not most - of the time. This one however is straight-up horror, with a mad scientist plot line, creepy old mansion setting, fog, cobwebs, a secret lab, coffins and the like. Best of all is that it has zombies! And they're very creepy, very dead looking kind just like the ones featured in classic b/w chillers like CARNIVAL OF SOULS (1962) and NIGHT OF THE LIVING DEAD (1968)! All three of the lead actors are very good, and Karloff gives a superbly creepy performance in this one.
.
★★★
Posted by The Bloody Pit of Horror at 2:35 PM