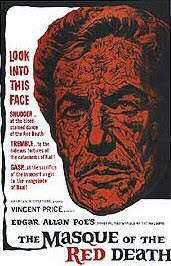 Directed by:
Roger Corman
Saying this is the best of Roger Corman's eight Poe adaptations is high praise indeed, since many of the others in the series (HOUSE OF USHER, THE PIT AND THE PENDULUM...) are also widely-regarded as classics of the genre. MASQUE was filmed on a low-budget on location in England on a five-week schedule and reaches incredible heights of atmosphere (and overall ambition) for such an inexpensive production. It truly is timeless and comparisons to Bergman (whom Corman names as an influence, along with Hitchcock) are not even out of the question. Vincent Price is his usual impressively evil self as the cruel (to put it mildly!) Prince Prospero, a Satan-worshipping sadist who seals himself inside a large castle with other wealthy noblemen and women while a red death plague ravages the less fortunate workers outside. Prospero truly is one of Price's most reprehensible characters... and in a career like his, that's saying a lot! First seen as his chariots nearly mow over an infant, the prince will go on to humiliate and terrorize every single person in this film. No one is spared his wraith; everyone exists just to be toyed with, degraded, corrupted, judged (his persuasive philosophies of evil are quite intriguing indeed!) and even killed. But there's also retribution lurking outside the castle walls in the form of a red-robed, tarot-card dealing phantom figure…

The supporting cast could not be better... Jane Asher is excellent as Francesca, an innocent, God-fearing peasant girl who Prospero holds hostage in the castle and tries to corrupt, partially by making her chose the fates of her father (Nigel Green) and her lover (David Weston). Asher is never a mannequin in her scenes and seems authentic in her wide-eyed wonder and horrified astonishment. Hazel Court is outstanding as Juliana, a noblewoman in league with the devil. Featured in two of the film's most memorable segments (a branding sequence and an incredibly stylish nightmare sequence where she is murdered over and over again), Court made one of the strongest impressions to me; she's calculating and evil, for sure, but also possesses a streak a airiness. Besides, any actress with the nerve to pledge her eternal love to Satan in a film made in the 1960s, has to be well worth admiring. Excellent British character actor Patrick Magee also has a memorable supporting role as Alfredo, Prospero's pompous and arrogant right-hand man, who gets what he has coming to him after assaulting the wife of a dwarf performer (Skip Martin).

Excellent period atmosphere (it's set in 12th Century Italy), Daniel Haller's elaborate production design, Robert Jones exquisite art direction, Charles Beaumont and R. Wright Campbell's well-turned script (which also wonderfully adds a non-intrusive Hop Toad subplot) and the top-notch performances give this the winning edge over every other Poe adaptation ever attempted. Nicolas Roeg's breathtaking and haunting color cinematography is another asset, best illustrated during several impressive sequences roving through large rooms, each lit with a different color. Good score by David Lee. The MGM release pairs this with THE PREMATURE BURIAL (1962) and each film has been wonderfully re-mastered and features the trailer, plus very informative and detailed interviews with Corman about the productions.
★★★★
Posted by The Bloody Pit of Horror at 8:37 PM