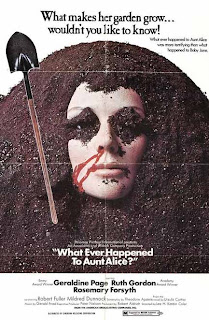 Directed by:
Bernard Girard (uncredited)
Lee H. Katzin
While it's not quite as good as WHAT EVER HAPPENED TO BABY JANE? (or WHAT'S THE MATTER WITH HELEN?, for that matter), this psycho-thriller (with black comic overtones) is still very much worth a look, thanks primarily to an outstanding lead performance from Geraldine Page. Page paints a deliciously evil portrait of a condescending, clever, hateful, spoiled and elitist murderess who was left with nothing after her husband's passing and now murders her elderly housekeepers for their savings; burying their bodies under the prized pine trees that adorn the front yard of her secluded, desert-set home. There's also a very spirited supporting performance from Ruth Gordon as Page's spunky new housekeeper Alice, who has ulterior motives for taking the position (she knew the last victim and wants to find out what happened to her). Many of the supporting actors and actresses are a bit bland, and the plot really isn't anything new, but that really doesn't do the film much harm since the majority of the time is spent on brilliantly played (and often brilliantly written) interactions between the two main veteran character actresses, who make this a joy to watch. There are also several unpredictable twists to Theodore Apstein's screenplay; which was based on Ursula Curtiss' novel "The Forbidden Garden." Director Lee H. Katzin took over for Bernard Girard after four weeks of filming.

The cast includes Rosemary Forsyth as the single young mother who moves in next door to Page, Robert Fuller as the guy who falls for her (and is somehow connected to Gordon's character), Joan Huntington as Page's snobby daughter, Peter Brandon as her husband and Mildred Dunnock as the housekeeper Gordon replaces. Produced by Robert Aldrich, who had previously directed two quintessential pictures in the 'geriatric psycho bitch' subgenre - the aforementioned Baby Jane ('62) and HUSH... HUSH, SWEET CHARLOTTE (1964); both of which starred Bette Davis.
★★★
Posted by The Bloody Pit of Horror at 11:46 PM