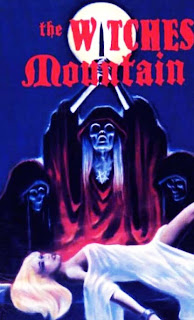 ...aka: Witches Mountain, The

Saying this movie is extremely hard to follow and just as frustrating to sit through is putting it very mildly. Also saying that the current available print is dark, dreary, scratchy, abysmally edited, painfully dubbed, seemingly censored and in almost unwatchable shape is also correct. This film is in dire need of a good re-mastering from the full, uncut, original negative and seeing how it's reasonably atmospheric (and won the director an award at the Catalonia Film Festival), it might actually be worth the trouble. Then again, maybe not... It's just impossible to tell in its current condition what kind of movie it actually is. It starts fairly interesting, if you can discount the completely senseless pre-credits opening sequence, which involves a deranged cat-killing, snake-loving little girl named Gerda. The girls mom, Carla (Mónica Randall, who should have laid off the eyeliner a little bit), splashes some gasoline around in the garage and torches the brat. Seemingly about as crazy as young Gerda, she goes to visit her estranged photographer (ex?) boyfriend Mario ("John"/Cihangir Gaffari). He's on vacation from work, but so desperate to get away from Carla that he begs his employers to set him up on an assignment... any assignment. She scowls "You'll be sorry!" as he heads out the door. Well, Mario is assigned to photograph "Witches Mountain" (somewhere in the Pyrenees, I believe). Before he gets to his destination, he gets sight of a hottie on the beach named Delia (Patty Shepard) and snaps a few pictures of her taking off her bikini top. Only slightly peeved, she claims to be a single writer, the two flirt and then decide it would be a swell idea if they went on the trip up the mountain together. When they stop by her place so she can pack her bags, Mario suddenly hears loud, sinister music. Delia claims he's just hearing things.
So the two begin their trip up the mountain, taking a stop at a local inn to spend the night. There they encounter a weird, partially-deaf, crazy-eyed innkeeper (Victor Israel) and Delia claims someone was spying on here through her window. The next day, under some trance, she wanders off up the mountain and is eventually located by Mario, who hops out of his jeep and runs after her. While he's finding out what's up, someone steals their wheels and they're forced to walk a piece, eventually finding the jeep undamaged at the foot of a small, ancient, seeming abandoned village... almost like someone was trying to intentionally lure them there. Well as we will see, that's exactly what has happened. In the village they encounter a friendly old woman named Zanta (Ana Farra) who claims she's the only person still living there and lets them stay in her home. Mario takes some pictures of the "abandoned" city and when he develops them they are eerily full of people. Slightly creeped out, he and Delia begin to leave and get stuck in "treacherous" fog and have to pull over and camp out for the night. The rest of the movie has to do with voodoo dolls, black cats transforming into sexy women, Satanic rituals performed by ladies in their bras and a deadly fall off a cliff. And yeah, coincidentally Carla the estranged wife turns out to be one of the witches, too. It all takes place in semi-darkness and to be quite honest, I didn't know what the hell was going on most of the time. The inconclusive "open" ending is just an additional slap in the face to anyone having to suffer through the rest of this senseless mess.
Honestly, there are just a couple of things that stand out as being good. The first is actress Shepard, who has that great Barbara Steele kind of dark, mysterious beauty that makes her presence perfect for films like this. The lead actor isn't too bad either and Israel and Farra contribute good character bits. There's also an excellent music score (credited to Fernando García Morcillo) and chanting songs, which aided immensely in making this film as atmospheric as it is. The location work is also fairly decent, but as I said, the print is ugly as can be and it doesn't make a lick of sense, so proceed with caution on this one.
.
Originally released on video in the U.S. by Unicorn, this has since fallen into public domain territory so it's easy to find on DVD now and is often found in those bargain multi-packs.
Score: 3 out of 10
Posted by The Bloody Pit of Horror at 9:38 PM