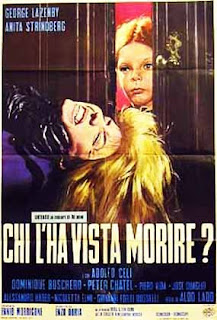 Venice is a gorgeous city full of canals, garish colors and stunning architecture. Setting a film in this city is always a plus because you are guaranteed an interesting backdrop. Unfortunately, when the city itself turns out to be the best part of the entire movie, you know you are in trouble. Even more disheartening, CHI L'HA VISTA MORIRE (known to English-speaking audiences as either THE CHILD or WHO SAW HER DIE?) is cynical enough to use Venice as nothing more than a distraction technique to keep people from realizing that this is simply just another tepid, poorly paced, clichéd-to-the-max murder mystery we've seen dozens of times before. Only slow. Very, very slow. I'm talking moving at the speed of a tortoise with three broken legs slow. I guess it takes a special kind of director to make a film about a serial killer of children this devoid of emotion, this bland and this uninvolving. Aldo Lado is not helped any by a cast of non-actors who sleepwalk through their respective parts, but he is especially not helped at all by his own uninspired direction.
One of the key shots in the film is a killer's POV shot. At first, the shot is effective at building up the creepy, off-screen menace getting ready to strike out. The shot looks through a thin black veil (presumably that of an old woman), watching victims as the Ennio Morricone music (an increasingly annoying children's choir) slowly starts to creep in. But then this same exact shot with the same exact music keeps being repeated over and over and over again for almost all of the horror related scenes. To make matters worse, the shot is used pointlessly on multiple occasions where nothing even happens. A common technique used in horror films is the "cheap scare." You know, like a cat jumping out of a closet to startle a character, and the viewer. In this film, the veil scenes are simply "cheap suspense" because the script fails to create any honest suspenseful/horrific scenarios based on the storyline, plot, characters or dialogue.
Another major problem are the characters. They are poorly developed, shallow and completely unsympathetic, and the actors portraying them seem disinterested in the material. You could care less about them or what happens to them. George Lazenby never once comes off as as impassioned or driven, which is important to the believability of his vengeance-seeking father character and Anita Strindberg also gives a one-note performance as a "grieving" mother who seems to be around solely to get topless. Just like them, this film is clinical, by the numbers; basically just going through the motions in a completely lifeless manner. And what a loss; this film could have been cold in a disturbing kind of way, but it's actually just cold in a blasé kind of way. And the ending reeks of desperate, lazy film-making and writing. The identity of the killer is supposed to be a surprise, but it's not a surprise in context of the script, it's a supposed surprise based on an occupation; a costume. It may not have helped matters that I watched this right after three other gialli that boast the same exact "surprise" ending. The cast includes Adolfo Celi, Dominique Boschero, Jose Quaglio, Rosemarie Lindt for more topless scenes and young Nicoletta Elmi as the murdered daughter.
★1/2
Posted by The Bloody Pit of Horror at 10:29 PM