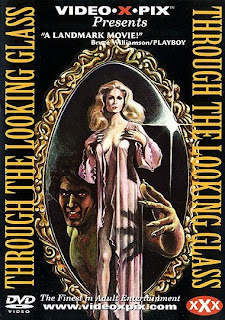 And that brings us to this 1976 effort, which is one of the most respected of all the adult films made in the 70s. It's basically a dark, depressing horror tale with disturbing, unerotic hardcore sex scenes. I've seen far better Gothic ghost/demon/possession movies, but I've certainly seen worse, and that's when you don't even factor the sex into the equation. Former Vogue model Catharine Burgess stars as Catherine, a wealthy, attractive socialite suffering from childhood trauma and failing to connect with anyone around her. She lives in a large, gloomy mansion (where she grew up) with her successful contractor husband Richard (Douglas Wood), teen daughter Jennifer (Laura Nicholson), maid Lisa (Terri Hall) and chauffeur Abel ("Michael Jefferson"/Roger Caine). Instead of spending time trying to connect with any of them, she spends her nights up in the attic gazing into a large antique mirror. Yep, Catherine's a little detached from reality. She starts becoming a little obsessive about stripping off her clothes, admiring her body and pleasuring herself before the mirror, and before long she's able to actually enter inside the mirror to view the sexual encounters of others... or have them herself.

Catherine's late father (Jamie Gillis), whose dignified pictures adorn the mansion walls, seems to be a spirit occupying the mirror... and he's not ready to give up on his precious daughter quite yet. You see, the two of them shared a special "bond" back in the day and have a much "closer" relationship than most father-daughter's do. Is dear old dead dad coming back to warn her or is his materialization in the mirror actually a demon in disguise trying to tempt Catherine over to the dark side? The horror aspects of the films, from the ghost encounters to a red light shining from the attic window a la AMITYVILLE HORROR to a hot, sandy vision of hell, are done fairly well. As far as the sex scenes go, you get a little variety, I guess - some solo stuff, some group stuff, some water stuff, some lesbian stuff, some more fetish-y stuff. In my opinion, little of it is really gold by conventional standards of erotica/porn. It also focuses on the darker aspects of sex, such as incest and rape. The camera shots/lighting aren't always flattering either. One of the most startling shots in this movie is a camera closing in on Catherine's vagina as some green hands zero in on it. Not only do we get a nice gynecological close-up, but the camera literally plunges inside and travels through it in a well lit shot. Have no idea how they pulled it off, but it's one of the most memorable (and least erotic) shots I've seen in a porn.

As far as the acting goes, it's a mixed bag. The leading lady's one-note performance is something of a debit. She's definitely a looker and no worse than usual for adult films, but she acts far too regal, breathless and poised throughout and one wonders what some of the more talented adult actresses, such as Georgina Spelvin (DEVIL IN MISS JONES) or Veronica Hart, could have done with this role. Gillis, however, is very effective in his role and gives a standout performance. Future director Joel Bender (THE RETURNING, THE IMMORTALIZER) was the assistant to the producer and some of the music was obviously done by Harry (FRIDAY THE 13TH) Manfredini because it sounds just like all of his other scores (not bad here, though).
★★1/2
Posted by The Bloody Pit of Horror at 11:58 PM