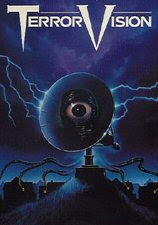 Directed by:
Ted Nicolaou
A hideous, toothy, blubbery, hungry space alien from the planet Pluton (excellently designed by John Carl Buechler) is transported into the home of oddball couple Stanley (Gerrit Graham) and Raquel Putterman (Mary Woronov) via a huge satellite dish. It quickly proceeds to attack and kill off the TV-addicted family and their guests one by one. This wanna-be cult film from Empire Pictures is an attempt at combining campy humor, 80s excess and sci-fi/horror, which does somewhat effectively play on the expectations of the sitcom-style Putterman household by turning mom and dad into swingers who enjoy inviting other couples back to their home for hot tub trysts, a grandfather (Bert Remsen) who's a motley survivalist and a young, precocious son (Chad Allen) who no one pays any attention to until it's too late. It's fairly well photographed, extremely colorful/gaudy and amusingly energetic at times, but more often than not it's loud, grating, stupid and irritating. It's the exact type of spastic, hyperactive, in-your-face intentional camp that gives yours truly a migraine.
.
Diane Franklin plays the flighty, rainbow-haired "punk" teenage daughter well enough (she also had an obnoxious family to deal with in AMITYVILLE II: THE POSSESSION), Jennifer Richards has fun as a vulgar Elvira-like TV horror movie hostess named Medusa and Jon Gries energetically fills the role of OD, the daughter's brain-damaged, heavy metal loving boyfriend. The cast also includes Alejandro Rey, Randi Brooks, Sonny Carl Davis and Empire Pictures regular Ian Patrick Williams (RE-ANIMATOR, DOLLS). The title theme is by The Fibonaccis. Supposedly based on an old Outer Limits episode.
★★
Posted by The Bloody Pit of Horror at 11:40 PM