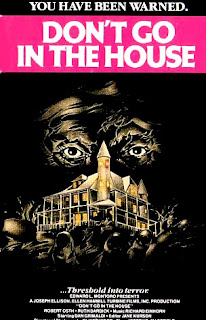 ...aka: Burning, The
...aka: Pyromaniac
Directed by:
Joseph Ellison
Donny (Dan Grimaldi, later a regular on the popular HBO series The Sopranos) is a weird, fire-obsessed loner who lives in a large house with his domineering, sickly old mother (Ruth Dardick). Childhood flashbacks reveal that when his momma got pissed ("You're a bad boy, you're evil and you must be punished!") she roasted his hands over the stovetop. Donny starts hearing voices, is taunted by his boss for failing to help out a co-worker who almost burned to death and then his mom dies, so it comes as no surprise when he finally snaps and goes on a killing spree. Female victims are lured back to his home, stripped nude and chained up in a specially equipped, fire-proof room with metal walls where they're coated with gasoline and then set ablaze with a flamethrower. This grisly murder technique, while only shown one time in its entirety, is very effective and surprisingly convincing looking since the fx employ optical trickery instead of a stuntman in a padded suit. After three women are killed (charred bodies arranged upstairs offsetting the otherwise bland, hotel room-like decor), Donny takes some time off trying to be normal again while being haunted by visions/voices of the dead. Meanwhile, Donny's concerned friend from work (Robert Osth), a decidedly odd choice for hero duties since he's basically an obnoxious jerk who cheats on his wife, and the local priest (Ralph D. Bowman) starts getting suspicious.
.
Acting is average at best, it's derivative as hell, misogynistic as hell (there's no female role of substance and every woman in portrayed as being abusive, drunken, stupid and/or bitchy) and not really worth going out of your way to see but oh well; I still kind of liked it. It's heavily influenced by the disco movement to ensure plenty of tacky, dated entertainment value. Donny decides to celebrate his first free minutes of freedom from mum by blasting a disco record, there's a long scene where Donny tries to pick out the right outfit for the "disco scene," "Shot by Boogie Lightning" is the end credits theme and there's a hilarious bit at a club where Donny smashes a candle in a woman's face and sets her hair on fire when she tries to make him get up and boogie down to the disco beat! It was a Video Nasty and criticized at the time for being misogynistic, even though overall it's actually much tamer than many other efforts from the period. The ending seems somewhat similar to the end of MANIAC (1980).
★★
Posted by The Bloody Pit of Horror at 7:37 PM