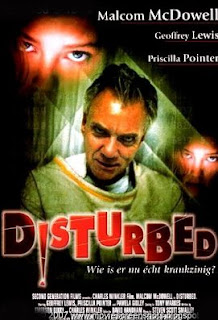 Directed by:
Charles Winkler
Mediocre, unpleasant black comic horror thriller features Malcolm McDowell (in a knockout performance) playing sex-crazed mental hospital psychiatrist Dr. Derek Russell, who gets his kicks by drugging and raping his better looking female patients. Sandy (Pamela Gidley, also good), a sex-obsessed, bitchy, suicidal ex-model arrives on the grounds, and strikes McDowell's fancy. But unexpected complications lead him to enlist the help of patient Michael (Geoffrey Lewis) to kill her, resulting in questionable sanity for Dr. Russell when Sandy's ghost seemingly returns to haunt him. I guess all of the imaginative, but overwhelming, camerawork is a plus (like following a flying needle through the air and a POV shot from a penis!), but a senseless ending is tacked on and the movie suffers from unlikable characters and standard institutionalized horror cliches. With Priscilla Pointer, Irwin Keyes, Clint Howard, Adam Rifkin and Dean Cameron as a singing telegram.
★★
Posted by The Bloody Pit of Horror at 2:45 PM