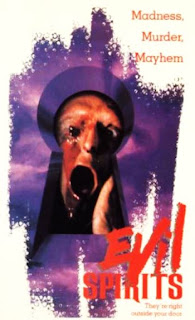 Directed by:
Gary Graver
The ubiquitous Karen Black (giving a delightfully campy performance here) stars as Ella Purdy, an insane boarding house owner who talks to the skeletal remains of her long-dead husband and slaughters her elderly tenants so she can cash their social security checks. Death is caused by knife to the eye, a (hilariously wobbly) hatchet to the head, a nail hammered into an eyeball and a machete slashing. Ella buries the dead bodies in her backyard, and nosy neighbor Yvette Vickers (ATTACK OF THE GIANT LEECHES) is always bitching about the smell. There's even a rabid elderly man chained up in the basement who rips people apart and eats them! This low-budget, but kind of fun horror comedy has some good scenes and a surprising and familiar cast of classic era film stars and horror veterans, some of whom haven't acted for upwards of two decades! They're all welcome change of pace in the current company of so many horror movie teenagers, but in case you disagree with me, a mute Debra Lamb is here too to dance topless. The director (who sadly passed away a few years back) was in his fourth decade of exploitation filmmaking and also served as cinematographer.
.
The great supporting cast includes Virginia Mayo (in her first screen appearance since the late 70s) as a miserable, spoiled old bat who used to have it all but is now forced to live off meager retirement checks, Bert Remsen as her henpecked husband, Michael Berryman as a voyeuristic weirdo, Martine Beswick as a psychic, Arte Johnson as a Social Security fraud investigator, Robert Quarry as a doctor, Mikel Angel (who wrote the screenplay) as a drunk, Hoke Howell as a mailman and Anthony Eisley as a police detective.
★★
Posted by The Bloody Pit of Horror at 9:15 PM

FANGO #113: "[karen black] admits that she was 'hardly in' fred olen ray's HAUNTING FEAR, a very loose edgar allan poe adaption that co-starred jan-michael vincent and scream-queen brinke stevens. 'they did it just to get my name. but i made a nice little movie, EVIL SPIRITS ... it was a very cute little horror film for what they had. gary [graver's] a nice guy, and i had a fun time doing that. i had the lead, and i get the audience to like me even though i keep murdering people. i loved working with gary -- he's a swell guy.' ... in parting [black] admits that she likes watching horror movies herself, though she sees them mostly on video now. 'my little girl loves them ... even though she's very young, she doesn't get frightened -- she just loves them. isn't that amazing?'"

there's more in this interview. they go into some of her other obscure genre films. she says some interesting things about tobe hooper and cannon films.