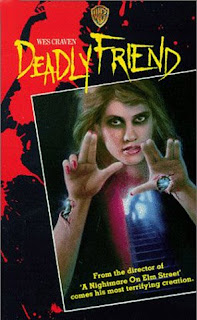 Directed by:
Wes Craven
Craven's follow-up to A NIGHTMARE ON ELM STREET (1984) and the TV movie CHILLER (1985), is a well-meaning drama with a major horror twist. Matthew Laborteaux (best known as Albert from the Little House on the Prairie TV series) stars as Paul, a teen genius who has just moved into a new house in a new town with his mother (Anne Twomey), has developed a remarkable robot sidekick named B.B. and falls for troubled, pretty blonde next-door neighbor Samantha (Kristy Swanson). After the robot is destroyed by an unbelievably bitchy old woman down the street (the memorable Anne Ramsey, who'd get some attention that same year for THROW MOMMA FROM THE TRAIN) and Samantha is killed by her abusive stepfather (Richard Marcus), the depressed teen revives his lost love by putting the robot's microchip in her brain. She returns to life and he's thrilled, but since this is called Deadly Friend, you can probably guess how long his glee will last. Many (mostly deserving) characters die and this has that famous decapitation by flying basketball death, which was actually inserted against the director's wishes but is ironically the most memorable part of the entire film! It's sweet-natured (well, for a horror movie...), but when Swanson starts flinging people through the air and jumping over police cars, you know that Craven has gone a little too far and compromised the serious content. The ending is especially disappointing.
.
Based on Diana Henstell's novel "Friend", which was adapted by Bruce Joel Rubin (GHOST and BLOOD RAGE!). Charles Bernstein did the music for this Warner Bros. release. Michael Sharrett co-stars as Paul's friend and Charles Fleischer provided the robot voice.
★★
Posted by The Bloody Pit of Horror at 2:08 PM