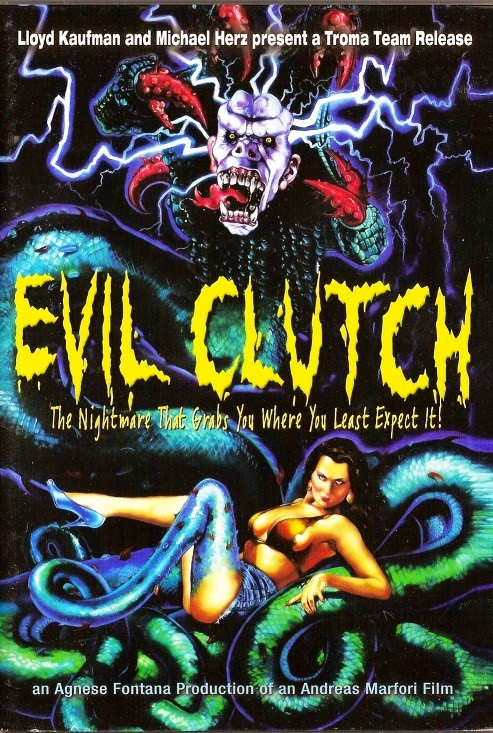 
During the charming opening sequence, a possessed female demon (Elena Cantarone) seduces a guy then rips his dick off. The next day a young vacationing couple (Coralina Cataldi Tassoni and Diego Ribon) arrive in the same nearly-deserted town. They encounter a strange man with a voice box who warns them to get away before it's too late and of course don't listen, as the same female demon from the beginning (wearing a leather duster) lures them through the woods to a abandoned house. A zombie (Stefano Molinari), who I'm pretty sure is the same poor emasculated guy from the first scene, shows up to torment them and the killer seductress also returns. She sprouts fangs and a three-clawed hand emerges from between her legs to do more damage! I guess that's the "Clutch" the American title is referring to. The voice-box man (Luciano Crovato) shows up again to get killed and return as a zombie, too. After the boyfriend gets his hands cut off, his loving girlfriend screams "Is there any end to all of this?" and runs away, leaving her helpless, handless boyfriend there as easy demon prey.

Originally titled Il bosco and most commonly known as Evil Clutch (other alternate titles include Horror Queen and A Night in the Woods), this pretty blatant Evil Dead copy has some lighting problems, absolutely zero logic, a minimal plot and overkill Raimi-style camerawork, but the make-up effects and musical score are good, it's pretty gory and the beautiful Alps mountains and an authentic old Italian town provide a very arresting backdrop to the action. There are only five actors in the entire movie. Leading lady Tassoni was also in DEMONS 2 (1986) and three Dario Argento movies; Opera (1987), his (pretty awful) remake of Phantom of the Opera (1998) and his last release Mother of Tears (2007). Rhino released the video, and it was later acquired by the folks at Troma for DVD release.