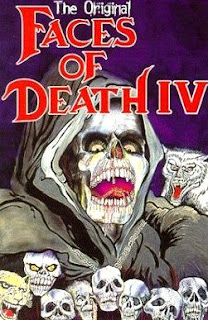 Directed by:
John Alan Schwartz
Susumu Saegusa
Andrew Theopolis
There's a new host this time ("Dr. Louis Flellis"), actually played by the director's brother James Schwartz, but this is the most ridiculous entry yet. Actually it's downright insulting. I'm not a fan of these "real death" movies, but to advertise something as such and promise your audience actual death, then proceed to fake your way through a bunch of badly-staged scenes is another. If you can't tell the magician getting his face smashed during an act-gone-awry is fake, then you really need to have your vision checked. A guy parachutes into an alligator pit. An amusing idea... but real? Give me a break. Another guy gets his leg cut off in a junkyard after a car supposedly falls on him. Why exactly would one be lying down on the ground with one leg stuck under an old rusty car so that could even happen? Some girl takes off her bikini top and laughs before getting a giant atomic leech stuck (?) on her arm. If they wanted to pull any of this off as being "real" then they should have hired better actors. Mondo fake-o. Listen for the hilarious theme song at the end, though.
NO STARS!
Posted by The Bloody Pit of Horror at 11:22 PM