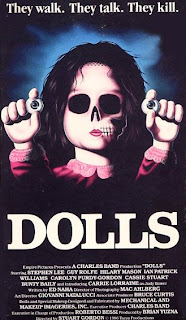 Directed by:
Stuart Gordon
Minor but passable little killer doll film isn't nearly as successful as director Stuart Gordon's breakthrough hit RE-ANIMATOR (1985), but is nonetheless watchable, fairly well-made and should please those who enjoy these kind of things. A sweet-natured overweight "big kid" type (Stephen Lee), truly wicked stepparents (the director's wife, Carolyn Purdy-Gordon, and Ian Patrick Williams), their cherubic young daughter (Carrie Lorraine) and two obnoxious new wave party girls (Cassie Stuart and Bunty Bailey) become stranded at a remote mansion during a thunderstorm. Inside, a seemingly nice and very hospitable elderly couple (Guy Rolfe and Hilary Mason) craft beautiful handmaid dolls that magically come to life and kill them off one by one. It doesn't take a rocket scientist to figure out who's going to survive the night and the plot is pretty nonexistent, but it's atmospherically set and photographed in a nice looking old house, the special effects (a mix of doll models and some wonderful stop-motion animation) are convincing and the production values are good enough to rate this right below TRILOGY OF TERROR (1975) and CHILD'S PLAY (1988) in the killer doll department. Gordon also made the (much better) FROM BEYOND that same year.
★★
Posted by The Bloody Pit of Horror at 2:24 PM