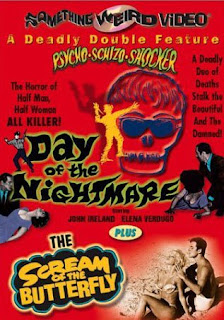 Directed by:
John A. Bushelman
An impotent transvestite chihuahua killer! If that doesn't pique your interest, I don't know what will. DAY OF THE NIGHTMARE is basically a mix between a nudie and PSYCHO, with a pinch of HOMICIDAL thrown in for good measure. I think it's a bit better and more entertaining than the 4.1 rating on IMDb might suggest. I liked it. The unknown Cliff Fields delivers an outrageously OTT performance as deranged painter Jonathan Crane. He's impotent because his parents were swingers and as a child he walked in on mom doing one of her lovers, who then spanked the voyeuristic little weirdo. Now Johnny gets his jollies by tying up topless models and smacking their bums with a belt until he, uh, well you know. If that isn't entertaining enough, Jonathan is also a schizo who slaps on a cone bra, trench-coat, pageboy wig and sunglasses and goes on a murder spree under his secondary persona, "Doris Mays." Neighbors who spot Doris leaving her apartment think she's just your run-of-the-mill "bull dyke" but no one seems to be able to put two and two together that Cliff and Doris are actually the same person.

Jonathan is married to the sweet but very naive Barbara (Barbara Bain) and she tries to be understanding that her husband is always away on "business." Little does she know, but "business" equals putting on ladies under things, hiring lesbian prostitutes and murdering women who remind him of his impotence! Sometimes when hubby is gone, Barbara is stalked by "Doris," who hangs around outside the home spying on her and eventually sneaks inside her home, attacks her with a knife and chases her around in the woods for about five minutes. Here and there, the film throws in a gratuitous nude scene, such as when three swinger couples put on blindfolds, spin around until they're disoriented and then feel/crawl around the room looking for members of the opposite sex they can start groping (!) Oh yeah, and for some reason "Doris" slays a chihuahua because its barking is annoying her. I can't stand yippy little ankle biters either, so this didn't bother me. The movie is very funny at times and seems just as confused about what it wants to be as Jonathan. There are lots of crazy flashbacks attempting to explain Jonathan's behavior, obligatory psycho-babble and even several surprisingly creepy moments and a bit of suspense. I'm convinced Mr. De Palma watched this before he made DRESSED TO KILL (1980). Both obviously take their cue from PSYCHO, but have a lot in common otherwise, right down to the killer's disguise (the wig, trench coat and sunglasses).

Top-billed John Ireland (an Oscar nominee just fifteen years earlier) "stars" as the lead detective on the case, but his performance is forgettable, and his scenes are boring. John Hart (BLACKENSTEIN) is pretty awful as Jonathan's self-centered psychiatrist father, who sleeps with his female patients. Legendary Liz Renay (of John Waters' DESPERATE LIVING fame) has an uncredited one-scene cameo as one of the dad's lascivious patients. Bette Treadville (who looks like she belongs in a Waters movie) is the 300-pound black maid. And Elena Verdugo (HOUSE OF FRANKENSTEIN) has just one scene as an art agent. Bain was pretty good as the female lead, but the movie is dominated by Fields, who gets to act like an arrogant, eye-rolling jerk as Jonathan, gets to scream and cry when recalling a traumatic childhood with two oversexed parents, and (with help from a female dub-over) gets to act dainty, mannered and feminine as "Doris." It's a shame he didn't get any other starring roles.

The DVD is from Something Weird, who have paired it with another movie called SCREAM OF THE BUTTERFLY (1965). I started watching Scream the other night and it seemed like it might be decent enough to merit a purchase of this disc. It's about an adulterous platinum blonde bikini-clad tramp named Marla (Nelida Lobato) who conspires with her lover to kill her wealthy tycoon husband, who married her after a week-long fling. Seems more noir/thriller than horror, but I'll try to finish it and write a review. It's well shot by Ray Dennis Steckler (R.I.P.) and seems to have pretty amusing dialogue, nude scenes from the busty leading lady, plus a hilarious rip-off of the FROM HERE TO ETERNITY beach scene.
★★1/2
Posted by The Bloody Pit of Horror at 8:55 PM