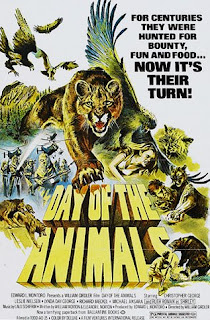 ...aka: Something Is Out There


"In June 1974, Drs. F. Sherwood Rowland and Mario Molina of the University of California startled the scientific world with their finding that fluorocarbon gases used in aerosol spray cans are seriously damaging the Earth's protective ozone layer. Thus, potentially dangerous amounts of ultra-violent rays are reaching the surface of our planet, adversely affecting all living things. This motion picture dramatizes what COULD happen in the near future IF we continue to do nothing to stop this damage to nature's protective shield for life on this planet." Not only is this a fairly enjoyable killer animal flick, but as you can tell from the opening credits scroll, also a warning to us all about the dangers of fucking over Mother Nature. Nowadays, the ozone layer depletion and Global Warming are hot button political issues, but thirty years ago it was a fairly fresh concept people were just starting to take seriously. Day of the Animals isn't really concerned with scientific theory, though. Global Warming is mostly used an easy, timely excuse to show a bunch of animals going buck wild and killing off a bunch of humans. Overall, I think this is a more enjoyable movie than the same director's more popular Jaws rip-off GRIZZLY (1976). Like fellow nature-runs-amok effort FROGS (1972), it doesn't limit itself to one killer beast, but a whole forest full - rats, wolves, snakes, dogs, cougars, bears, falcons, tarantulas and others get to join in on the fun and terrorize the cast. Speaking of which, boy do we have a nice little crew here...

Christopher George leads the group of backpackers through the picturesque Sierra Nevada mountains. Included on the journey are journalist Lynda Day George (who appeared alongside her hubby on numerous occasions), bespeckled professor Richard Jaeckel (who had appeared with Chris George in Grizzly), pampered and overprotective mom Ruth Roman, wise Indian guide Michael Ansara, one little boy and a couple of other lesser-defined men and women (including a young Andrew Stevens). The character most people remember is an insufferable, controlling upper-crust asshole played so obnoxiously over-the-top by Leslie Nielsen you can't wait for him to die. Stranded deep into the woods, these characters are picked off one by one by the radiation-crazed forest animals, bicker a lot while they hike around and eventually split up into two groups. Sure it's silly at times, but it's a fairly well made movie with some well-edited horror and action sequences, decent cinematography and some nice outdoor locations. The attack sequences themselves range from unintentionally hilarious (the leapin' rat attack) to surprisingly potent (particularly one girl's cliff-side avian encounter and a man besieged by a rabid domestic dog and some rattlesnakes by a car).

There are two DVD releases this film. The first is from DVD Ltd., which should be avoided. It's the flat, VHS quality full-screen print of the film and comes with no extras. The release from Shriek Show contains both the letterboxed TV master print and a letterboxed theatrical release print under the alternate title Something Is Out There. There's also a poorly recorded, completely disorganized commentary track from star Lynda Day George (who claims this was actually filmed in 1974), Jon Cedar, "horror icon" Scott Spiegel and some other guy talking over each other the entire time (I listened to half of it before turning it off), interviews with co-stars Cedar, Paul Mantee and Susan Backlinie, a still gallery and two original trailers.