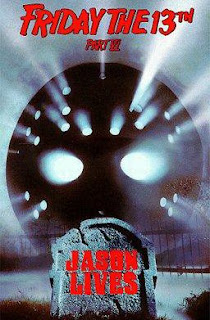 Directed by:
Tom McLoughlin
Jason (C.J. Graham) is revived by lightning after Horshack digs up his grave and then heads back to his old stomping grounds at Crystal Lake (renamed Forest Green here) for more of the same. In this entry, the camp is actually open and running, so there are lots of little kids running around, but only the adults die. Tommy Jarvis (played by RETURN OF THE LIVING DEAD's Thom Mathews) is senselessly blamed for the killings - What? Isn't this like second time, now? - by asshole Sheriff Garris (David Kagen), but Garris' daughter Megan (Jennifer C. Cooke) believes he's innocent and helps spring him from jail so the two can take on Jason during the finale. A few of the murders are creative, such as girl getting her face indented on the wall of a moving RV and three heads simultaneously whacked off with one swing of a machete. This entry doesn't take itself as seriously as the others and has some tongue-in-cheek humor, which has led to some people calling it the best of the sequels. I personally don't agree with that sentiment (aren't the others humorous enough without obvious jokes and forced comedy elements added?) and think this is one of the lesser entries. Director McLoughlin had previously made ONE DARK NIGHT. Alice Cooper contributes a song at the end.
★★
Posted by The Bloody Pit of Horror at 11:53 PM

for a long while, i'm going to remember #6 as a real drag. this time, mcloughlin's jokes, allusions and polish only rankled. maybe i was jasoned out: i'm not a FRIDAY fan, and i'd just sat through #5 twice, once with the (very amusing, mind you) danny steinmann commentary track, so...