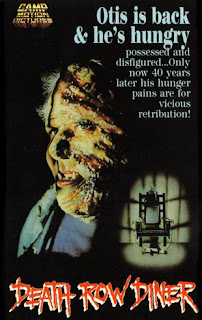 
1940s movie mogul Otis Wilcox (John Content) is fried in the electric chair for a crime he didn't commit... and worse yet, on an empty stomach! Many years later, a group of people show up in the same exact prison to shoot a horror movie and are plagued by the inconvenient disappearances of both cast and crew. Yup, Otis has returned from the grave as a cannibal zombie and seeks revenge against the filmmakers for turning his once prosperous movie studio into a B-grade sleaze factory. If you think this sounds sort of like Destroyer (1987) or a dozen or so other electric chair/prison horror flicks, you're exactly right. Only this one is shot-on-video, has no nudity, mediocre-at-best acting, phony gore effects (like a guy whose eyeballs pop out after a thud to the back of the head with a ping pong paddle), an annoying Elvis-impersonating caterer and plugs for Hollywood Chainsaw Hookers and Fangoria magazine. Whatever fun there is to be had is limited to watching B grade stalwarts Jay Richardson and Michelle Bauer (playing a slimy movie director and his actress wife, who happen to hate each other's guts) gamely ad-libbing their way through the proceedings.

Scraped from the bottom of the Camp Motion Pictures barrel (then again, about 80 percent of their releases were awful), but it gives hope to all amateur filmmakers out there. If this thing can get a video release then anything can! The cast includes Tom Shell (Surf Nazis Must Die) as an actor and no less than four actors who'd just appeared in ZOMBIE DEATH HOUSE (1987) - Salvatore Richichi (who co-wrote, executive produced and was the stunt coordinator), Frank Sarcinello, Jr., Dana Lis Mason and Dennis T. Mooney - another horror with a prison setting.

not much more than promotion for camp's video line-up, especially CHAINSAW HOOKERS, which is probably the best thing that company ever put out and they knew it. does enough for me just by being shot on video, though i wish the whole thing had been as amusing as when michelle bauer cracks up during the end credits blooper reel.

I just recently snatched a copy of this so I'll be re-watching it here soon and writing a more in depth review. At the time I wrote this I wasn't at all accustomed to 80s SOV so hopefully now that I am this will look good in comparison to some of the other useless junk (Blood Lake, Sorority Babes in the Dance-A-Thon of Death, etc.) I've watched recently.

there are three names (including tom shell, and why not?), some... written dialogue, and a competent crew, which gives it a leg up on most DIY traditional narrative.

with homemade horrors, each time, i hope for a dynamite (even just interesting) script that just happens to have been shot on tape; a project where it was the idea that came first, not the me-too desire to make a feature. when working with actual film, even on small projects, a team has to believe in what they're doing for it to be worth their while; the same holds true for any creative enterprise, really, expensive or not.