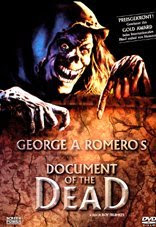 Directed by:
Roy Frumkes
If you loved DAWN OF THE DEAD or like the work of director George A. Romero or special effects artist Tom Savini (and if you don't then I donwannaknowya!), then do yourself a favor and watch this well made and informative documentary. It mostly covers the productions of Dawn and (then jumping ahead around ten year) TWO EVIL EYES, but also touches on other Romero films. I was very surprised to see a commercial for Calgon soap (a clever FANTASTIC VOYAGE take off) that Romero and his crew worked on in between films. In a telling scene, Romero and Savini spend all day on the set (of Two Evil Eyes) to make sure a special effects scene comes out just right. It is that kind of dedication that always shines through with the finished product. Susan Tyrrell narrates the early footage and many actors and production people are seen hard at work or being interviewed. I liked it quite a bit, and if you're interested in horror filmmaking, FX make-up, or film production, then you'll probably like it, too.
.
It's been released numerous times to video and DVD and is now one of the features on the four-disc "Ultimate Edition" of Dawn (released by Anchor Bay). DARIO ARGENTO'S WORLD OF HORROR (1985) briefly touches on Argento's association with Dawn, and is another recommended documentary. Frumkes returned to write and produce the very gory and tasteless STREET TRASH (1987).
★★★
Posted by The Bloody Pit of Horror at 2:24 PM