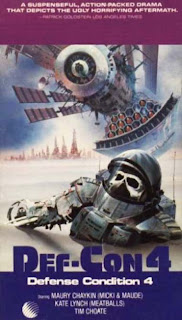 Directed by:
Paul Donovan
Bleak sci-fi begins with three astronauts (Tim Choate, Kate Lynch and Maury Chaykin) who are forced to crashland on post-nuke earth after a nuclear holocaust. Much of the population has been wiped out, but those who remain are either savage mutant cannibals (who are first seen carving meat slices off of a severed leg) or unbelievably sadistic cretins who imprison innocent people in a slave camp and are led by a fascist Hitler clone (Kevin King). Some of the special effects (especially the space scenes at the beginning) are good, the cast try their best and a couple of interesting things happen, but overall this is grim, dull and just extremely, needlessly unpleasant. Recommend only to those who enjoy people wallowing around in their own filth. The director also scripted and the cast includes Lenore Zann and John Walsch.
Score: 3.5 out of 10
Posted by The Bloody Pit of Horror at 5:14 PM