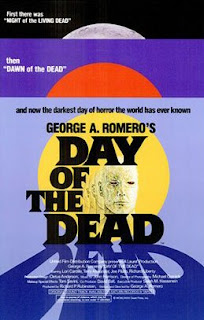 
Directed by:
George A. Romero


Romero's follow-up to NIGHT OF THE LIVING DEAD (1968) and DAWN OF THE DEAD (1978) doesn't quite stack up to either of those outstanding films, but is still a worthy conclusion to his "Dead Trilogy." Things open with a fantastic pre-credit sequence as a group of surviving humans arrive (via helicopter) in a seemingly vacant Florida city, call out and then have to quickly flee as moaning zombies slowly start filling up the streets. The action is then relocated to an underground military bunker where a dozen or so people, who may well be our planet's last survivors, are hiding out. The claustrophobic setting, differing viewpoints and a mostly bleak outlook on their future have created a tense, hostile environment for everyone involved. The military faction of the group (led by Joseph Pilato) are getting sick and tired of risking their asses to provide zombies for the science unit's experiments, which aren't progressing fast enough for their liking. However, the doctors feel they need more time and a little cooperation if any of them are going to stand a chance of reclaiming the planet.

Sarah (Lori Cardille), the only female of the group, is caught somewhere in the middle of things; trying to keep peace between the obnoxious, sexist, racist military men, a boyfriend who's quickly losing his mind and brilliant-but-loopy chief scientist Dr. Logan (Richard Liberty, from THE CRAZIES), who has been nicknamed Dr. Frankenstein for the amount of corpses he's sliced up since they're been there. But Dr. Logan thinks he'll be impressing everyone with his pet project - a tame zombie named Bub (Howard Sherman), that's been conditioned to do human things (operate a Walkman, shave, etc.) and not view humans as a food source. Trying to stay as far away from all the drama as possible, though acting complacent is certainly no better or worse than what else is going on, are black helicopter pilot John (Terry Alexander) and alcoholic radio man William (Jarlath Conroy).

Day has been heavily criticized over the years for being heavy on talk and light on action, though much of that talk and many of the ideas and themes being juggled around here are actually quite interesting. It's also been criticized for its overacting and unlikable characters, and that's something I completely agree with. While neither Night or Dawn contained Oscar-caliber performances, Night's cast of amateurs were believable everyday people trapped in an extraordinary situation and the protagonists in Dawn were more well-rounded and possessed enough humanity and nobility that you actually found yourself caring about their fates. In both films there was a certain unforced naturalism that's sorely lacking in this one. Instead, we get grotesquely stereotyped roles, more one-dimensional characters and near-relentless loud screaming that makes it difficult to become invested in any of these people. With the exception of Cardille, Logan and a couple of others, the performances (mainly from the military guys) are overwrought to the point of being campy and that, to me, seems sorely out of place. While I do get what they were trying to do (characters slowly losing it due to stress, tension and rampant hopelessness), it just all seems overdone.

Still, this entry is a favorite of some viewers. I can only chalk that up to Tom Savini's special effects because that's where some priorities seem to lie. And I'll admit, the zombies here look much better than the ones seen in Romero's two previous films. Ditto for the explosion of disembowelments, decaptations and various other gruesome fx at the film's climax. It's all very well done and effective, but in my mind that alone will never make this the superior film. Criticisms aside, I still consider this a good movie. It's far superior than most others in its genre; though-provoking, exciting and scary in parts, regardless of the problems.

John Amplas (from Romero's excellent MARTIN) and Gregory Nicotero (fx man) play small roles, and Romero himself can be seen playing a zombie. Twenty years later (and thanks to the box office success of the solid Dawn remake), Romero returned with LAND OF THE DEAD (2005), his highest-budgeted zombie movie, and then would effectively return to his stark indy roots with the sorely underrated DIARY OF THE DEAD (2007) a few years later. Day was also followed by an awful unofficial sequel (DAY OF THE DEAD 2: CONTAGIUM) in 2005 and was horribly "remade" in 2008 by director Steve Miner.

surprised by the lack of comments on this one. i've always been in the camp that (yeah, OK) _hated_ DAY OF THE DEAD and would cast aspersions on anyone who stupidly thought it was the best of the three. ebert's take on it mirrors my own close enough.

after a gap of about fifteen years, i picked up the anchor bay DVD (i didn't even own it on tape anymore), and during an early morning viewing, found myself being drawn in and appreciating the film on a "don't know what you've got 'til it's gone" level. this was horror filmmaking at a time when it enjoyed a high degree of visibility in the culture and yet could still feel dangerous and culty; make-up/effects at their peak (savini's best work?); i loved the 'mid-80s laurel look', and the art-direction; can't imagine anything other than john harrison's OST backing this stuff up; and perhaps most significantly, for the first time, i was able to cast aside my knee-jerk rejection of the idea of the 'learned zombie' and really look at the fine difficult work sherman howard was doing in the role of 'bub'. "now i get it!" type stuff.

romero and his rag-tag band of outlaw pittsburghers would come together again on other projects, but for me, this feels like the last one with that same original sense of purpose and momentum. i still don't like the film much at all, but i'm so glad it's there.

I never outright disliked Day but I definitely found it (and STILL find it) inferior to the first two despite it also being a pretty damn good movie in its own right. I think decades of outright awful zombie films since then have really done the film and its reputation well over time.

and off the top of my head, i can't think of another "high-profile" zombie pic from the second half of the '80s, though i guess RETURN OF THE LIVING DEAD (1985) came out after DAY.

Hmmm... I really can't think of many either. I remember seeing the Return sequel in theaters as a kid in 1988. There was also Serpent and the Rainbow the same year but that features old school voodoo zombies and Pet Sematary the year after, which also didn't have Romero-esque zombies. In my mind the next major zombie movie after 1985's Day / Return / Re-Animator was Peter Jackson's Dead Alive in 1992.

in the interim i remembered savini's take on NIGHT. it's odd how those movies just up and shambled away like that.

Oh yes I forgot about that one! They did shamble away for a spell... but now they won't GO away. lol