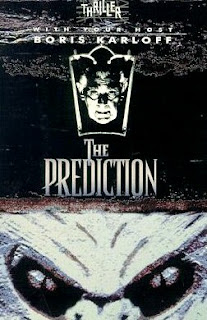 ...aka: Thriller: The Prediction

Directed by:
John Brahm
The popular Thriller series hosted by horror legend Boris Karloff ran from Fall 1960 to Spring 1962 on NBC and made an impact on lots of kids during its day, including a young Stephen King, who has called it "the best horror series ever put on TV." Unfortunately, of the 60+ episodes that were made, only six of them were officially released. This, along with "The Grim Reaper," "The Incredible Doktor Markesan," "Masquerade," "The Premature Burial" and "The Terror in Teakwood" were all issued (separatly) on VHS in 1996 by MCA/Universal. And sadly, that was it. Even though some (bootleg) sites offer the entire series on DVD-R, this has yet to see the legitimate box set release it deserves. "The Prediction" (episode 10 of the first season) was directed by John Brahm, who previously made the very good Jack the Ripper-inspired THE LODGER in 1944 and the hard-to-find Vincent Price vehicle THE MAD MAGICIAN ten years later, and would go on to direct 12 entries of the Thriller series. This particular episode is also noteworthy for being the first and only time in Season 1 where Karloff got to host and play a major acting role in the story.
"The Prediction" opens with a comic stage act from Clay Mace aka "Mace the Mentalist" (Karloff in a fake beard, turban and cape), from all indications a phony psychic for entertainment purposes only, who ends up seeing something horrifying about to occur at a boxing match. His premonition comes true and a fighter is accidentally killed. Karloff's pretty young stage assistant Maureen (Audrey Dalton) is in love with handsome Grant (Alexander Davion), but her no-good, alcoholic father/manager Roscoe (Alan Caillou) - who's riding off his daughter's coattails - disapproves of the union. Mace has another cryptic vision about the father being murdered after collecting money from the boxing-match-gone-awry and it also comes true. Now free to do as she decides, Maureen decides it's time to move on and start her life with Grant, who has just gotten a lucrative job offer in Italy. Unfortunately for them, Mace has yet another premonition about someone getting killed on their trip there. Soon after Maureen and Grant leave, Mace convinces his manager Gus (Abraham Sofaer) to try to catch up to the couple before it's too late.
Though watchable for the most part, with a little suspense at the end and a (rather predictable) twist ending, this episode wasn't nearly as good as the other Thriller episode ("The Incredible Doktor Markesan") I watched this evening. On the plus side, the performances are decent. Karloff and Dalton's relationship is done in a rather touching father-daughter sort of way, and the two actors play off one another well, but the supernatural aspects are half-baked and not so satisfying. No explanation is given as to why Karloff's character suddenly develops strong ESP abilities, while there's also no explanation why the deaths and accidents are suddenly happening with such regularity. Hell, at one point Karloff even saves Sofaer's live from a falling sandbag!
★★
Posted by The Bloody Pit of Horror at 2:24 PM