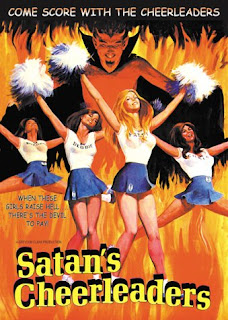 Directed by:
Greydon Clark
Benedict High cheerleaders Patti (Kerry Sherman), Chris (Hillary Horan), Debbie (Alisa Powell) and Sharon (Sherry Marks) stick by their motto "All for one and one for all!" Not because they believe in power in numbers but because between the four of them, they may have a cumulative I.Q. above the mental retardation bracket. These eternally giggly gals have to be four of the dumbest, sluttiest bimbos ever to (dis)grace a horror film and every sentence that comes out their mouth just has to have some sort of sexual double-meaning. If you view this movie, you will have the names of these rah rah girls permanently etched in your brain, partially because they are four of the most inane tramps on celluloid, but mainly because you have to sit through 90-some odd minutes of them running around in circles in the middle of the woods with their names plastered across their skin-tight sweaters. After wasting an hour on standard drive-in filler (chicken and balloon fights, toilet papering, showering, messing with football players, beach volleyball, etc.), the four ladies, plus their idiot tattletale coach Ms. Johnson ("I'm telling the principal!," "I'll tell your wife!"...), become stranded in the sticks after their van breaks down and run afoul on sheriff John Ireland's rural Satanic cult. He, wife Yvonne De Carlo (as a devil priestess who stares at everyone), devil-worshipping monk Sydney Chaplin (no doubt the comedic high point of the entire film) and others plot to find a sacrificial virgin amongst them. "Hey man, I'm not a virgin... I'm a cheerleader!" Good luck with this group, eh? Aiding the bad guys in their attempt to round up the cheerleaders are a pair of killer Dobermans named Lucifer and Diablo. The ubiquitous John Carradine also puts in an appearance as drunk bum.