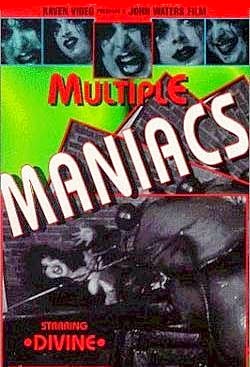 
I love the grainy, inky, black and white look of this movie, the bad cuts and scratches and even all the jumps in sound. It all just looks and feels incredibly cool and probably couldn't be effectively duplicated today. Just a strange feeling is captured here, probably amplified because it's populated with so many hedonistic weirdos, perverts and people you'd cross an busy intersection to avoid coming into contact with. Of course, these slight perks only exist because Waters and his crew were completely inept in the technical ways of cinema, but who really cares? Content wise, this has at least a flash or two of brilliance, which is impressive for a film that cost around "5000" bucks. The opening at the 'Cavalcade of Perversions' is pretty amusing if not downright hilarious, as we are subjected to myriad 'degenerate' horrors such as unshaven, booze-swilling hippies, a heroine addict freaking out for a fix, a nude human pyramid, a girl with hairy armpits, two bearded men making out and a 'puke eater.' This freak show is fronted by 300 lb. master criminal Lady Divine (Divine) and her unfaithful boyfriend Mr. David (David Lochary), who she swears up and down is responsible for the Manson massacre!

After successfully pillaging a dozen or so uptight suburbanites, a combination of events causes Divine to become even more insane than he / she already is. For starters, she's pulled into an alley and gang-raped. Secondly, she's sexually assaulted by "religious whore" Mink Stole in a church and receives a 'rosary job' (don't ask). And finally, Mr. David and his "auto-erotica copraphrasiac" and "gerontophiliac" (!) mistress Bonnie (Mary Vivian Pearce) plot to kill her and accidentally end up shooting her slutty pot-smoking daughter Cookie (Cookie Mueller) in the face instead. After Divine is raped by "Lobstora," a giant crustacean, she's finally "there" (i.e. nuts), goes on a rampage and can only be stopped by the National Guard! 'Tis a true shame Mr. Waters hasn't visited our genre more often, that's all I got to say.

Certainly not for everyone, instantly dated by too many then-topical cultural / political references, and containing an exceptionally tedious and overlong delusion with Divine narrating her version of Christ. Even more time is padded with endless scenes of characters sitting, walking, riding in cars and/or lying in bed talking (and often forgetting their lines), plus some topless jitterbugging from Mueller. Despite all that, there are tons of laughs (intentional and otherwise) and the closing sequences (starting with Lobstora) are just priceless. The film is still completely unique 30+ years later after it premiered, so it certainly deserves some credit for that alone. The cast includes the incomparable Edith Massey (used to better effect in Female Trouble) as a barmaid, Susan Lowe (Desperate Living), Pat Moran, John's brother Steve and a bunch of other Waters movie regulars.

This one hasn't yet received a DVD release, but was issued on VHS twice in the U.S.; the first time in the 80s by Cinema Group and the second time in the mid 90s by Raven Video.

Now out on a blu ray from Criterion; first version I've seen that was actually watchable.

I'm definitely getting that.