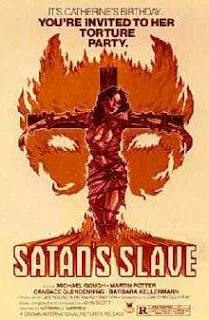 Charming psycho Stephen (Martin Potter) gets a blonde girl drunk, ties her to the bed and then threatens to do naughty things to her naughty parts with a pair of scissors before she decides she's had enough. On her way out, he smashes her head in the door and then stabs her to death. Nice guy, huh? Meanwhile, pretty London teen Catherine Yorke (Candace Glendenning), who is plagued by some odd premonitions, heads out on a week long vacation with her parents to visit some distant relatives she's never met before. Unfortunately, as soon as the car pulls into the secluded Yorke family country estate, the car crashes into a tree in the front yard. When Catherine gets out to get help, the car blows up and kills both dad and mum. Though she's only slightly distraught by the bizarre accident, uncle Alexander (Michael Gough), who immediately announces he's not only her uncle but also a doctor, decides it would be best if Cathy stayed for a few days to re-coop and get to know him and his son, her cousin… Stephen (the nut from the opening sequence). Also in the house is a bitter "secretary" named Francis (Barbara Kellerman), who is also Stephen's part-time lover.
Catherine's premonitions continue, including a strange dream where she's stripped naked by (naked) female cult members, has a pentagram carved into her stomach and a metal staff shoved where the sun don't shine. In another dream, a blonde is stripped naked, branded and whipped by a priest, who is played by writer David McGillivray. A few days after the shock of her parent's death, Catherine feels well enough to screw Stephen (the fact they're first cousins doesn't seem to phase anyone and is never even commented upon once). Francis gets jealous and bitchy ("I won't be rejected for good!") and then decides to get revenge on Stephen by helping out Catherine and explaining the devious plans her uncle and kissin' cousin have in store for her. See, there's a family ancestor named Camilla who is powerful witch that can only be revived by the blood of a direct female descendant. Guess who that is?
Shot in Surrey, England, this OK exploitation jumble has gobs of full female nudity (that the cameraman doesn't hesitate to get close-ups on), some gore (sometimes employing an obvious dummy) and surprisingly good acting from the four leads. The script stinks to high heavens and the ending is poor, but it's lively enough to keep you watching for an hour and a half.
★★
Posted by The Bloody Pit of Horror at 1:32 AM