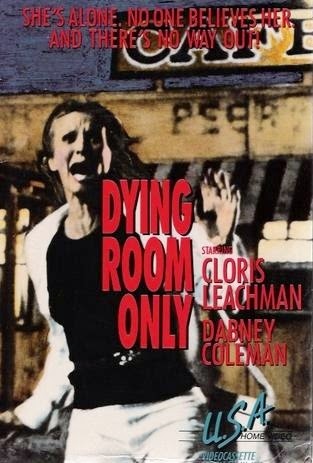 
A married couple from Los Angeles, Jean (Cloris Leachman) and Bob Mitchell (Dabney Coleman), are traveling across the desert. He's angry at her because she had him take a detour so she could get some pictures for their daughter and now they're way off schedule. They stop at a tiny roadside café to grab a drink and a bite to eat and find the place vacant except for an extremely unfriendly cook (Ross Martin) who doesn't seem to want them there, and a lone customer (Ned Beatty). Jean steps into the bathroom for a minute to wash her face. When she returns to the diner her husband is missing and the cook and customer claim they have no clue what happened to him. Jean knows good and well that he wouldn't just leave her there (plus their car is still in the parking lot) and sets out to find out what happened to him. A locked back room accessed only through the men's bathroom and a small motel next door with four rental units (which is run by a suspiciously uncooperative Louise Latham) may hold the clue. Throw in an escaped convict (Ron Feinberg) and a local sheriff (Dana Elcar) who confirms that a lot of other people have disappeared in the general vicinity and the mystery is set.

Richard Matheson's teleplay is really the basis for this film's success. The premise is entirely believable and he's able to create genuine suspense and intrigue through small detail, dialogue and character interaction. And that's crucial for a small scale, low-budget film like this one, which has just a handful of characters and very few actual location changes. The cast is good, too, particularly Leachman as the increasingly more hysterical wife desperate to find out where her husband is, and Martin as the irritable cook who seems to hiding something. The eventual explanation behind the disappearance seems a bit pat and conventional, but for a good hour plus, this keeps you guessing and on the edge of your seat. The film (released to tape by the company U.S.A. Home Video many years ago) is also notable as a precursor to the 1997 hit Breakdown starring Kurt Russell.