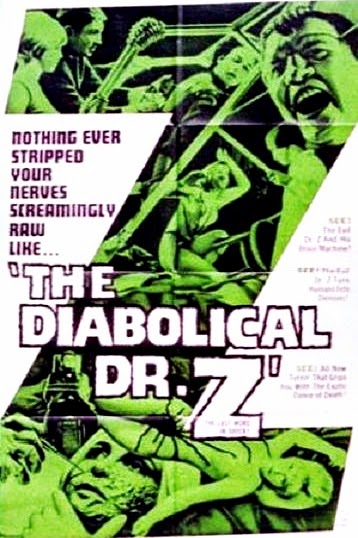 
Easily the best thing I've seen thus far from Franco and even more surprisingly (taking into account his spotty track record) one of the absolute best films to emerge from the 60s European Gothic horror renaissance. Mabel Karr stars as Irma Zimmer, a wheelchair-bound mad scientist's equally mad daughter, who promises to carry on in her late father's experiments and also plots to get revenge on three doctors (including Franco regular Howard Vernon) who publicly mocked him. Using a strange technique involving robotic arms and steel rods driven through the flesh, she's able to control the actions of several people - including a convicted sex killer who has just escaped from prison (Guy Mairesse) - and force them do her bidding. Another of her targets is Nadja (aka "Miss Muerte" aka "Miss Death"), a sexy blonde nightclub performer whose sensual act incorporates everything from mannequins to a giant spider web. Now under Irma's control, and dressed to kill in mesh outfits and razor-sharp, curare(arrow poison)-dipped fingernails, Miss Muerte is sent out at night to locate, seduce and then murder the doctors. Nadja's on-again/off-again detective boyfriend Phillippe (Fernando Montes) and some police inspectors (including director/producer Franco and composer Daniel White) try to figure out what's going on.
.
The settings and b/w photography are atmospheric and exquisite, there's more flesh and violence than most other films from the era, the camerawork is anything but static, the plotline is enjoyably far-fetched and extremely entertaining, the score is typically (for a Franco film) jazzy and Estella Blain is striking as the deadly femme fatale. The cast also includes Antonio Jiménez Escribano as Dr. Z, Ana Castor as Dr. Z's female assistant, Marcelo Arroita-Jáuregui (who had played Jekyll in Franco's 1964 film DR. ORLOFF'S MONSTER) and Alberto Dalbés. Fans of Gothic / atmosphere-heavy black-and-white films (particularly EYES WITHOUT A FACE, which this obviously was heavily influenced by) should move this onto their must-see lists. It was once considered a "lost" film but thankfully an excellent print was eventually discovered and has been released to DVD through Mondo Macabro.