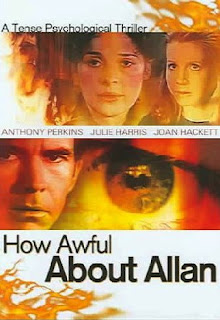 
Allan (Anthony Perkins) is blamed for an accidental fire that killed his father (Kent Smith), disfigured his sister (Julie Harris, who wears a plastic device over part of her face) and landed him in an institution. Eight months later, partially blind and guilt-stricken, he's let out of an institution and rents a room from his estranged sibling in an effort to put his life back together, but someone is out for revenge and wants to drive him crazy. Is it his darling sis? Friendly neighbor / ex-girlfriend Olive (Joan Hackett)? The creepy new boarder whose face is always obscured? The father back from the grave? Or is it just in Allan's mind? Perkins can do the paranoid/fragile/slipping-sanity act in sleep and Harris and Hackett offer good support, but this tele-pic is dull, light on plot and fizzles out way before the finale. Blurry POV shots and murky photography make for a pretty oppressive viewing experience. Henry Farrell (who also wrote WHAT EVER HAPPENED TO BABY JANE? and HUSH... HUSH, SWEET CHARLOTTE) adapted his novel of the same name. Aaron Spelling was the executive producer.