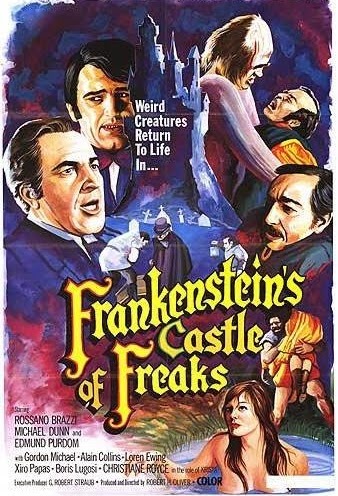 Some people may like this cheap / silly / trashy exploitation monster mash more than I did. Sure it's mildly amusing at times and has a cast full of familiar faces, but I found it mostly dreary and dull. It was the directorial debut of Dick Randall (using the alias "Robert H. Oliver"), a man best known for producing a large number of sleazy horror and exploitation movies spanning three decades (early 60s until the early 90s). Count Frankenstein (Rossano Brazzi, star of the screen version of South Pacific) is busy at work at the lab in his castle home, sending out his greasy gravediggers to get corpses for his experiments, and tinkering around with a tied-up, unibrow-sporting cave man named Goliath (Loren Ewing). The doc's beautiful, straight-laced young daughter Maria (played by "Simone Blondell"... any relation to Joan?) shows up with her fiance Eric (Eric Mann) and her best friend Krista (Christiane "Royce" / Rucker, from that great West German Gothic horror film THE TORTURE CHAMBER OF DR. SADISM). Dr. Frankenstein takes a liking to Krista, but will his wicked ways spoil their blossoming romance? One of the count's assistants is the dwarf Genz (3'4" Michael Dunn, who had received an Oscar nod for Ship of Fools in 1965), a real sick-o type who fondles dead bodies, spies on the women bathing and having sex, and is eventually kicked out on the castle for being a little pervert.

Genz teams up with Ook ("Boris Lugosi" aka Salvatore Baccaro aka the hairy missing link rapist in THE BEAST IN HEAT), yet another cave-dwelling Neanderthal man outcast, and the two plot to get back at the doctor. In one scene the duo kidnap a girl from town, tie her up and rape and kill her (which takes place off-screen). Genz tells Ook, "I'm going to teach you the pleasures of life!" Goliath escapes and starts killing everyone he can get his paws on and townspeople with torches show up for the finale. Frankenstein's army of "freaks" also includes muscular henchman Igor (Gordon Mitchell, the star of many Italian peplum flicks apparently looking for work now that his genre dried up), hunchback Kreegin (Xiro Papas - who played the titular creature in a similar Euro-sleaze effort called Frankenstein '80) and butler Hans ("Alan Collins" / Luciano Pigozzi). Edmund Purdom also shows up as the local prefect (police chief).

The absolute funniest thing about this dreary, seedy sleazefest is that it was rated PG! Yessir, I have the old Magnun VHS (nudity and sick content intact) which clearly has the rating printed on the cover. Was Helen Keller chairman of the rating's board that year or something? The best quality DVD prints are the ones released from Raro and Something Weird. Other budget labels seems to be video transfers, while Raro and SW's use the 35mm and 16mm prints, respectively.