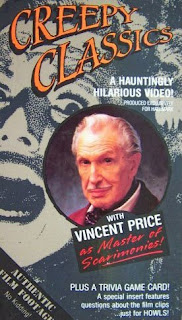 Directed by:
Pamela Page
CREEPY CLASSICS begins with a psychologist talking about 1959's HORRORS OF THE BLACK MUSEUM, informing us it was filmed in "Hypno Vista...the most fantastic advance ever to be made in motion picture entertainment!" Then it cuts to everyone's favorite campy charmer Vincent Price as he sits in a old movie theater making comments about a compilation of clips from classic vintage horror and science fiction movies of the 50s and 60s. There are over two minutes worth of clips apiece from INVASION OF THE BODY SNATCHERS (1956), I WAS A TEENAGE WEREWOLF (1957) and NIGHT OF THE LIVING DEAD (1968) and a running gag is made out of Christopher Lee's battle with the disembodied hand in DR. TERROR'S HOUSE OF HORRORS (1964). We also get the trailer for, and some funny scenes from, THE RAVEN (1963), the great pendulum scene from PIT AND THE PENDULUM (1961), and trailers for ATTACK OF THE PUPPET PEOPLE (1958), THE BLOB (1958), THE SCREAMING SKULL (1958), WAR OF THE COLOSSAL BEAST (1958), DINOSAURUS! (1960), GORGO (1961) and THE DAY OF THE TRIFFIDS (1962). And that's about it in this harmless enough half hour view.

Not much ground is actually covered here, and die-hard horror fans have seen most - if not all - of these trailers and clips before, though when this was released back in 1987 that probably wasn't the case as I'm sure many of these movies were difficult to find. Price being the host, of course, helps considerably and makes this of more interest than it otherwise would be. He's full of his usual enthusiasm, makes some hilarious facial expressions and gets plenty of cheesy one-liners. After watching a zombie eating a bug he comments "Kind of makes you want to go to the refreshment stand, doesn't it?" After seeing the triffids in action; "Kind of makes you want to start watering your rhododendrons, doesn't it?" So if you're a Price fan, this'll be a half hour well spent. The original VHS release from Fox Lorber came with a ten-question trivia card.
★★
Posted by The Bloody Pit of Horror at 11:41 PM