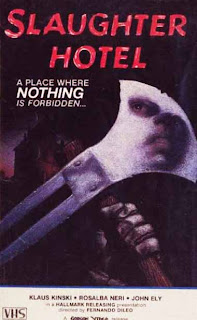 ...aka: Asylum Erotica
...aka: Beast Kills in Cold Blood, The
...aka: Clinic of Shadows, The
...aka: Cold-Blooded Beast, The
Directed by:
Fernando Di Leo

The 'hotel' of the title is actually a secluded country 'loony bin' where rich men drop off their inexplicably beautiful and unhinged wives. It is never made quite clear, but you get the strong impression that the husbands want rid of these women... permanently! How else can you explain a hospital staff so inept they spend more time in the front yard playing croquet than dealing with the patients? Or the fact that a blonde whack-job can attempt to club a doctor over the head with a log and never be restrained or reprimanded? Or a front lobby filled with Medieval torture weapons that anyone can pick up at any given time? A cloaked killer (seen only in shadow until the end) makes full use of the 'tools' and proceeds to whack off a head with a scythe, chop up a body with an axe, shoot an arrow through a neck and more. While this film may be stretching for the surreal (and I'm really stretching by even suggesting that), and there are a few interesting segments, it still is likely to be a big disappointment to many horror fans. Those looking for female nudity or soft-core porn, however, may want to give it a look. Klaus Kinski has very little to do here as Dr. Francis Clay. He basically spends time sitting around and talking to pouty-lipped recovering patient Cheryl Hume (Margaret Lee). But Kinski's the type of actor who could sit there clipping his toenails and still be a great red herring in films like this. Unfortunately, the script relies less on character quirks to make the actor seem like a suspect than it does on his similar hair-style. Oh well, let's forget about Klaus for a minute...

It is actually Rosalba Neri who has the film's most interesting role and gives the best performance, and she is why this movie isn't a total washout. Handed a throwaway super-slut character (an extreme nymphomaniac named Anne Palmieri), Neri refuses to walk through her role like most of the rest of the cast and injects her character with the proper air of desperation. One of the very best scenes in the film has her writhing in the shower, trying to keep her feverish sexual instincts in check. See, Anne is in such bad shape, she can't even shower without being distracted by thoughts of sex. Wearing an amazing black outfit (which rivals Erika Blanc's in THE DEVIL'S NIGHTMARE), she tries to sneak off to have sex with the groundskeeper several times, then tries to seduce two orderlies at once. She gets one guy in the sack... errr, greenhouse (her recklessness almost making her an early victim), then ends up slapping the guy in the face because he won't let her stay the night! Alas, Ms. Neri dies earlier than she should and the film comes to a halt without her energy and professionalism.

John Karlsen (BLACK SUNDAY) plays another clinic doctor and Monica Strebel is a lesbian nurse who seduces a young black woman (Jane Garret, who is about as animated as a rock throughout) by massaging her ass, bathing her and dirty dancing to some God awful Euro-pop song. The horror sequences are nothing great (unless you shiver at the thought of ketchup-smeared murders), but the director wears out the zoom lens when it comes to exposing female flesh in extreme close-up. In fact, there are several pretty graphic female masturbation sequences that make this one briefly cross into hard X-rated territory. One even features Ms. Neri. Since the heavy stuff is done in a solitary close-up, it's most likely another actress doing it, but you never can tell.

Original publicity tried to gain an audience by comparing the silly goings-on in this one to the Richard Speck killings! The Shriek Show SLAUGHTER HOTEL DVD release (which uses a print with the title THE COLD-BLOODED BEAST) is a pretty complete version of the film; a good-looking print with most of the nudity, sex and gore intact. It is very well photographed. Unfortunately, there's a major sound problem toward the end where the dialogue is not matched up with the action. Also on the disc is a brief interview with the director, who himself says this film is definitely nothing special but still appreciates the cult following it has. He also harps on the beauty (and figure) of Neri and claims Kinski (despite a difficult reputation) gave him no problems whatsoever and, in fact, ended up giving the entire crew a big tip when he finished filming his scenes!
★1/2
Posted by The Bloody Pit of Horror at 11:34 PM