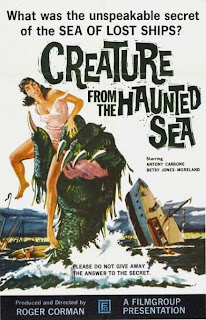 Directed by:
Roger Corman
Ever heard of Roger Corman's 1957 effort NAKED PARADISE? Well he remade the same story twice, once as CREATURE FROM BLACK LAKE and once as this. Yes it's cheap, yes it's silly as all hell, yes it might have the worst monster costume of all time, yes it frequently pops up on "worst of all time" lists, but this delirious high camp offering puts most other horror comedies to shame thanks mainly to a hilariously off-kilter script by Charles B. Griffith. So yes, against my better judgment I ended up liking this one quite a bit. Not quite up to the standard set down by the teams LITTLE SHOP OF HORRORS, but it'll do. More review coming soon.
Score: 6.5 out of 10
Posted by The Bloody Pit of Horror at 11:44 PM