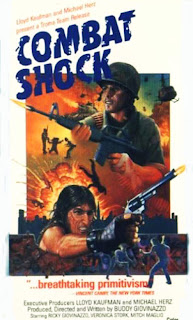 First released to theaters as AMERICAN NIGHTMARE (in 1986), this is the story of a screwed-up Vietnam vet named Frankie (Ricky Giovinazzo, brother of the director) who is struggling to get by in New York City. His bickering, miserable wife (Veronica Stork) is constantly criticizing him because he can't get enough food to feed the family, which includes a horribly deformed little baby (one of several key elements swiped from ERASERHEAD). Frankie sets out to the streets to get rent money so they won't get evicted. The atmosphere is extremely grim, with drugs, crime and prostitution running rampant all over the seedier areas of the city where Frankie spends much of his days. He's hassled by cops while waiting in an unemployment line and is chased around and beat up because he is indebted to mobsters.
.
Hampered by some uneven (and unconvincing) amateur acting, this extremely depressing tale has some potent nightmarish imagery, gritty photography and enough powerful, disturbing and/ or thought-provoking moments to make it worth one's time. It was the first effort from the director/producer/editor, who'd also make the unfinished MANIAC 2: MR. ROBBIE (1989), before heading to Germany to direct TV shows. It's one of the most interesting films in Troma's huge catalogue and is available in both a cut R rated version (85 minutes) and a director's cut version (92 minutes).

Email ThisBlogThis!Share to TwitterShare to FacebookShare to Pinterest
Labels: military/war