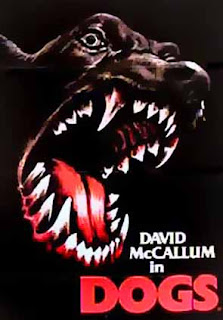 Directed by:
Burt Brinckerhoff
Eleven dogs (that's what I counted) decide they've had enough of playing fetch and terrorize a town, wiping out everyone at and around a small California college. The story is stupid, boring and talky, everything is too dark, lead actress Sandra McCabe can't scream, a strategically placed shower curtain hides a potential nude scene for future TV star Linda Gray (after a rabid poodle attacks) and, oh yeah, beware of ferocious felines coming soon to a town near you. Also available under the ingenious title DOGS. Some videos claim it was made in 1972. David McCallum and George Wyner star as college professors, along with Jim Stathis (THE BLACK ROOM) and Russ Grieve (THE HILLS HAVE EYES).
★
Posted by The Bloody Pit of Horror at 11:32 PM