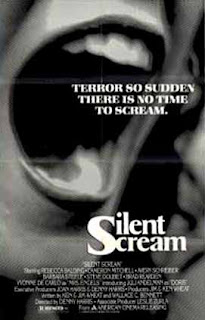 
What starts off as a so-so slasher flick finally picks up steam during the last half hour thanks entirely to a memorable guest appearance from horror queen Barbara Steele. Four California college students; spunky Scotty (Rebecca Balding), nice guy Jack (Steve Doubet), rich kid Peter (John Widelock) and pleasantly plump Doris (Juli Andelman), all looking for affordable off-campus housing, end up at a seaside mansion with several rooms (and even more secret passageways) for rent for less than 100 bucks a month. The home's stern, humorless owner, Mrs. Engels (Yvonne De Carlo) and her weird, geeky, voyeuristic grandson Mason (Brad Rearden) are strapped enough for cash that they risk all by revealing a dark family secret they've tried to keep hidden in the attic for years - mute, mentally disturbed murderess Victoria (Steele). When a drunken Peter ends up getting stabbed to death on the beach, police detectives Cameron Mitchell and Avery Schreiber are on the case.
.
Quite restrained when compared to its early 80s slasher competition (there's some blood, but no explicit gore) and nothing really new script-wise, but this succeeds in a few areas others of its type do not. For starters, the level of exaggeration is kept to a minimum and the premise is a bit more plausible than usual. Secondly, the characters are at least tolerable and more appealing than the annoying clods who'd later start populating these types of films. Another difference is that there's little of that thinly-veiled conservative heirarchy with it comes to who lives and who dies. In other words, the victims aren't all "bad" kids who indulge is sex and drugs and our heroine isn't a holier-than-thou virgin. And finally, as mentioned earlier, the film really benefits from a creepy, intense, yet wordless, performance from Ms. Steele, who is able to convey much emotion through facial expression alone.
.
The Media VHS, issued way back in 1983, is long out of print and as of this writing, the film has never been on DVD. Code Red announced they'd be releasing it in 2007, but have apparently handed over the reigns to a company called Scorpion Releasing, who promise to be getting this out by the end of the year. I guess we'll see!