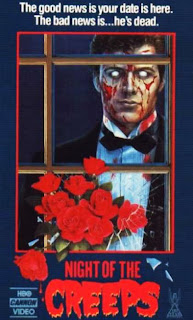 Directed by:
Fred Dekker
In a black-and-white prologue set in 1958, something falls from the sky and a slug-like alien organism enters a man's mouth, causing him to go crazy and chop up his date with an axe. He's captured, frozen and forgotten. In 1986, some college kids at "Corman University" decide to break into a secluded lab and steal a corpse as part of frat initiation. Guess which corpse they steal? After the body and what is contained within thaws out, the slugs (which breed inside the human brain) are all over the place, flying into people's mouths and turning them into murderous zombies. An extremely dry cop (Tom Atkins, who's great in the role and makes the most of the good one-liners) teams up with three students (unpopular geek Jason Lively, his sarcastic, crippled roommate Steve Marshall and pretty/popular sorority girl Jill Whitlow) to stop them. Dekker's film debut is a smart, lively, scary and funny homage to old B horror films and sci-fi flicks made by someone who obviously knows and loves the genre. There are in-joke character names (most of the characters are named after famous directors [Cronenberg, Romero, etc]; a touch that has gotten old over the years), clips from PLAN 9 FROM OUTER SPACE on a TV set, good special effects, lots of gore and some witty dialogue.

Several members of the KNB Fx group (Howard Berger, Robert Kurtzman) get to play frat jock zombies and legendary cult actor Dick Miller has a fun (though brief) cameo as a police armorer named Walter. The cast also includes Allan Kayser (from the "Mama's Family" TV series) as the asshole B.M.O.C., Wally Taylor, Bruce Solomon and Robert Kerman as policemen, Vic Polizos as a coroner, David Paymer as a scientist at the cryogenic's lab and Suzanne Snyder as a sorority girl. THE MONSTER SQUAD (1987) was the next film by the director, who also scripted. As of this writing, despite being popular and having a decent-sized cult following, this film has never been released to DVD and is one of the most anticipated titles for a release.
Score: 7 out of 10
Posted by The Bloody Pit of Horror at 2:16 PM