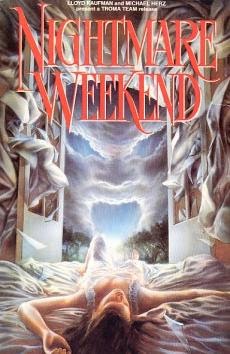 
Even though this film isn't well known, it should be! It's easily one of the worst, yet most hilarious, horror films of the 80s. "You may look innocent, but you're a slut...just like your mother!" That's a snippet of choice dialogue delivered by the evil, ball-busting lady assistant (Debbie Laster) of a famous scientist to her prim maid just before she lures three incredibly dumb college girls to a mansion for behavior modification experiments. Meanwhile, at the local bar, people drink and dance to lame 80s rock songs. A biker punk has sex with a cycle slut on a pinball table in front of a crowd of people, then tries to rape the scientist's virginal daughter Jessica (Debra Hunter), who is in love with another biker (Dale Midkiff, the dad from PET SEMATARY), who, in turn, is in cohorts with the assistant! Back at the house, the sorority bimbos swim, shower, change clothes and have sex with men from the bar. A small silver ball (part of the experiment) flies into victims mouths and turns them into drooling, killer zombies. If that isn't enough to entertain you, there's a hilarious theme song ("Nightmare Fantasy"), roller skating, some serious daisy dukes and a psychic hand puppet (!?) that warns "DANGER! DANGER!" just like the "Lost in Space" robot and recommends hitchhiking as one of the best ways to pick up men (??)

This filmed-in-Florida mess is so mind-numbingly awful that multiple viewings are recommended to soak it all in. And, hey isn't that NYPD Blue's Detective Jill Kirkendall turned CNN newscaster Andrea Thompson as one of the oft-nude bimbos? Sure is! It was also the starting point for both future Hal Hartley favorite Robert John Burke (who also starred in 1992's well-regarded Dust Devil and the Stephen King adaptation Thinner), not to mention B movie regular Karen Mayo Chandler (OUT OF THE DARK). According to people who worked on the film, French and UK backers pulled half the budget at the last minute, the script was rewritten multiple times, much of the crew didn't even speak English and the producers tried to flee the country before paying everyone. Production began in 1982 and new footage was added sometime later for the video release in 1986. Troma now pawns it off on people in cheap sets.