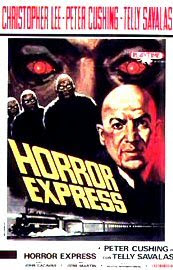 ...aka: Pánico en el Transiberiano
...aka: Panic in the Trans-Siberian Train

Great fun's to be had in this British/Spanish co-production, which might as well be called The Thing From Another World on the Orient Express. Anthropologist Alexander Saxton (Christopher Lee) discovers an ape-like prehistoric fossil in China circa 1906 that he believes to be the missing link and decides to ship it back to England on the Trans-Siberian Express. Unfortunately for all on board, the "fossil" turns out to be something evil indeed; an intelligent soul-sucking alien creature capable of retaining the memory and knowledge of its victims by simply staring at them. Anyone exposed to the ghoul dies and during autopsies are revealed to have bloodshot ping pong eyeballs and smooth brains (from where their knowledge and memory have been erased). The science is downright silly (viewed under a microscope, fluid from the creature's eye reveals photo captures from its victims' POV), but that really doesn't stop this from being a highly entertaining and sometimes pretty eerie little film. The script is generally well-written and the great international cast includes Peter Cushing as Dr. Wells, Lee's urbane scientific rival, the late Telly Savalas as a crazed Cossack captain, Helga Liné as a sexy stowaway/spy, George Riguad and Silvia Tortosa as a count and his beautiful daughter, Victor Israel as a luggage worker and Julio Peña as an inspector. Strangely though, Alberto de Mendoza all but steals the entire movies as a Rasputin inspired (mad)man of the cloth.
Now in the public domain, HORROR EXPRESS has been released by just about every budget DVD label out there. Most of these prints are actually viewable, but reportedly the two best quality releases are the ones from Cinema Deluxe and Euroshock.
Pointless Trivia Note #45902: Supposedly, the idea for this film came about because producer Bernard Gordon owned the model train used during the production of NICHOLAS AND ALEXANDER (1971). He also re-used both the model train and train interiors for his production of PANCHO VILLA (1972).
★★★
Posted by The Bloody Pit of Horror at 1:25 PM