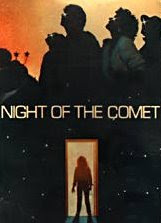 
End-of-the-world/apocalyptic scare films were big in the early 1980s. There was the Emmy-winning ratings champ THE DAY AFTER and the Oscar-nominated TESTAMENT in 1983, then the BAFTA-winning THREADS in 1984. We were just coming out of a large international wave of zombie films still trying to cash in on the success of DAWN OF THE DEAD (1978), and science fiction was still big because of the original STAR WARS series (1977-1983). Combining all three? Not a bad idea at all, and this is not a bad little movie. Because they both managed to spend the night in steel enclosed buildings, Valley Girl sisters Regina (Catherine Mary Stewart), a thoughtful, level-headed and introspective type who works at a movie theater and likes video games, and Samantha (Kelli Maroney), a spoiled, quick-witted cheerleader, manage to survive a passing comet that turns the majority of the Earth's population into piles of orange dust. Everyone else wasn't so lucky. Some have been turned into violent, zombie-like killers. The girls visit the mall (cue "Girls Just Want to Have Fun") and a radio station and eventually run across a guy Hector (Robert Beltran - who had appeared with Woronov in the wonderful EATING RAOUL just two years earlier), as well as some scientists (led by Mary Woronov and Geoffrey Lewis) who promise to help but are actually after fresh blood because they've been infected and will eventually die without it.
.
Director Eberhardt (who had previously made SOLE SURVIVOR, which is said to have been a big influence on the FINAL DESTINATION films) does a commendable job combining genres and infusing what's essentially a grim apocalyptic story with upbeat humor, gets spirited performances from his cast and throws in plenty of in-jokes and nods to B-movies of the past (have fun linking movie posters with various cast members). The film made over four times its 3 million dollar budget on its initial released and is still much-loved by 80s movie afficianados. And it took awhile, but it finally got its well-deserved DVD released in 2007. Sharon Farrell has a funny supporting role as a bitchy stepmother and Michael Bowen (VALLEY GIRL) is also in it. The original title was TEENAGE MUTANT COMET ZOMBIES. It's rated PG-13.

Night of the Comet fan site at www.nightofthecomet.info

They really don't make end of the world movies like this anymore, huh?