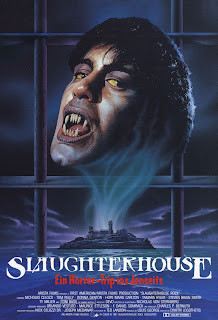 ...aka: Hell Island
...aka: Horror on Alcatraz
...aka: Slaughter House


College student Alex Gardner (played by Nicholas Celozzi, who is likely the son of executive producer Nick Celozzi, Sr.) is plagued by nightmares of a cellar-dwelling ghoul at Alcatraz. He dreams of cutting off his own hand, spitting up a worm, a ghoul ripping open his chest and being roasted over an open fire. After his friends see him levitating "6 feet" over his bed, a helpful, occult-obsessed teacher (Donna Denton) suggests that they sneak into Alcatraz to face his fears. Of course they go in the middle of the night when no one is around to help when things get out of hand! The group become stranded, Alex's brother Richard (Tom Reilly) becomes possessed and starts killing everyone. Toni Basil of "Mickey" fame shows up as the helpful ghost of Sammy Mitchell, lead singer of the group "Bodybag". She teaches Alex how to levitate out of his body and does a rock music dance intercut with repeat nightmare footage to pad out the running time. Playboy Playmate Hope Marie Carlton is also on hand to provide some topless nudity. All of the victims show up as wisecracking ghosts a la the Griffin Dunne character in An American Werewolf in London.

The script is full of plot holes, cheesy dialogue and lame attempts at comedy. Decent FX work and cool opening credits (both provided by Ernest D. Farino) are the only things gaining any merit. Basil and Devo ("Whip It") do some songs on the soundtrack. It's one of the least enjoyable of around a dozen heavy metal / hard rock fueled horror efforts to come out during the 80s and early 90s.

"killer soundtrack by devo!" sez the box cover. by 1987, that wasn't much of a selling point given their sharp decline (as a group) after the excellent OH, NO! IT'S DEVO in 1982. they were probably drafted in by star toni basil who somehow got them involved (writing/playing) on her first record. this OST sounds like out-takes and noodling from the what-happened-to-these-guys? TOTAL DEVO sessions. quite dismal all around.