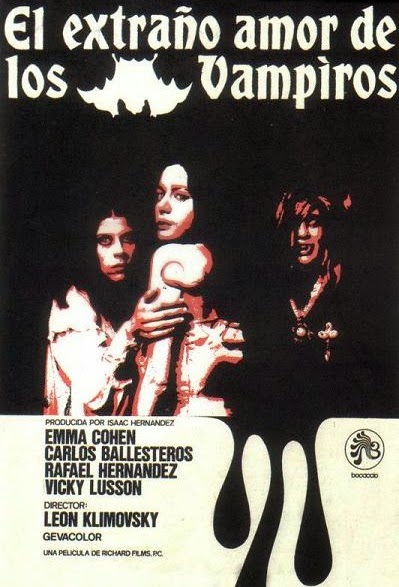 ...aka: Night of the Walking Dead


A very interesting, though difficult to find, Spanish vampire flick from León Klimovsky; the guy behind such titles as the Paul Naschy vehicle THE WEREWOLF VS. THE VAMPIRE WOMEN (1970) and the village-full-of-bloodsuckers tale THE VAMPIRE'S NIGHT ORGY (1973), which is similar in many ways to this one. Night of the Walking Dead (whose original release title translates to The Strange Love of the Vampires) starts as a garden variety exploitation-horror before taking a more elegant, sophisticated and romantic turn, and it actually almost pulls it all off. Doctor Patrick ("L. Robled" / Lorenzo Robledo) has just moved to a small village where the superstitious townspeople believe vampirism runs rampant. A young girl named Marian has just died and the doctor thinks it's of natural causes, but is shocked when he attends the funeral and finds part of the ceremony involves driving a stake through her heart. Marian's body eventually turns up missing and her sickly, lonely, sad-eyed sister Catherine (Emma Cohen) seems to think that she'll become the next victim. There's an abandoned castle on a hilltop that's supposedly been vacant for over a century. Local legend has it that it was occupied by gray-haired Count Rudolph van Windberg ("Charles Balest" / Carlos Ballesteros), who allowed a stranded traveler and his two female companions to spend the night one evening, was seduced by one of the women and then was bitten. When he awoke he found his family and servant slaughtered and his guests gone before he himself fled the castle never to return.

One evening while her parents are out of town, Catherine has an uninvited guest. Guess who? Yep, Count Rudolph. He's returned to the village because every so often the local vampire populace will rise from their graves to throw a bloody good party before returning to their crypts by morning. Rudolph seems to fancy Catherine, and she returns his affections. After all, Catherine has just been stabbed in the back by the only man she loved (who is caught cheating and bad-mouthing her) and knows she is dying, so what the hell does she have to lose? So the vampires run around town claiming victims, while Rudolph tries to decide whether or not he actually wants to grant Catherine her wish for immortality.

What does a film like this the most damage (and makes it a bit difficult to assign any kind of rating to) is how it was released. The only English-language version I'm aware of was issued on VHS by a European company called Sunrise Tapes, which is in English but with burnt-in Dutch subs. Unfortunately, their release is way too dark. Nearly every scene taking place at night is difficult to make out. Whoever dubbed the film also did a negligible job and hired some truly awful voice actors. So in my estimation it really says something that the good aspects of the film manage to shine through regardless of the print quality. For starters, the remote village location and art direction are both good, particularly the latter. There are some nice designs on the all-white master bedroom in the castle and the room where the vampire party takes place. Speaking of the party, it's a great scene where Catherine and Rudolph descend the stairs and enter a room decked out in balloons, candelabras, sheets of see-through fabric and celebratory vampires dressed in Victorian era clothing dancing around. There's even a vampire violin player! The film's score is also excellent. Also in the cast are Rafael Hernández, Vicky (Viky) Lussón, "Bartha Barry"/Barta Barri, José Lifante as a vampire, Robert (Roberto) Camardiel and Tota Alba as Catherine's mother.

The film provides enough nudity and blood to please the exploitation fans while also attempting a more mature love story between the "living dead;" a young woman who's already resigned herself to death and a man who's technically already dead. I could easily see my score going up a point if a better version of this ever gets released.