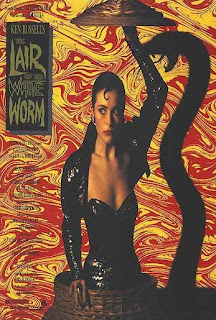 Directed by:
Ken Russell
Ken Russell was undoubtedly the right person to bring Bram (DRACULA) Stoker's final novel to the big screen. Stoker penned LAIR in 1911, while he was in the throes of Bright’s Disease; a horrible illness whose two chief symptoms are madness and fevered hallucinations. You can imagine how bizarre the book is. The movie is bizarre, too. Things begin in a small town in Scotland. An archeologist (Peter Capaldi) unearths a strange, monstrous skull on the farm of Mary Trent (Sammi Davis) and her sexy virginal sister Eve (Catherine Oxenberg), whose father had just recently disappeared. Meanwhile, various characters unwisely get involved with the evil, seductive, worm-worshipping priestess Sylvia Marsh (an excellent Amanda Donohoe), who has a giant, prehistoric, worm-like creature dwelling inside her gothic castle home. A pre-star (and pre-mumbling, bumbling idiot) Hugh Grant is among those investigating. Russell also adds plenty of comedy and some typically surreal and/or blasphemous nightmare sequences (crucified nuns and such) to this well-made film, but the rampant flashy weirdness (undercut only by some incredibly boring, talky sequences) gets tiresome before the lively finale picks the film back up again. I could go more into plot detail, but it's best to let you take your chances with this one; some will love it and others will hate it, and both will have just cause for their reaction to it.
Score: 6 out of 10
Posted by The Bloody Pit of Horror at 3:51 PM