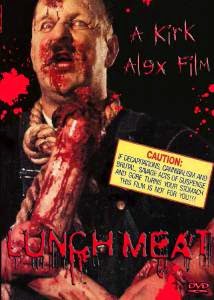 
Here's a Texas Chainsaw-inspired backwoods cannibal cheapie you may have missed the first time around. Shot primarily outdoors, entirely in broad daylight, and with a small cast, the film seems to consist mostly of people running around in the woods and sliding down hills, though there are some fun moments here and there if you like this kind of stuff. Six friends pass through Hollywood on the way to snobby asshole Cary's California vacation home. Cary (Rick Lorentz) and nice guy Frank (Joe Ricciardella) both seem to want to win over the affection of big-haired beauty Roxy (Kim McKamy), but other than that there's a distinct lack of characterization on the victims part. Somewhere along the way, the gang get lost out in the sticks, pull over their jeep to help who they think is an injured guy and are immediately ambushed by cannibal Paw (Elroy Wiese) and his three insane sons, including obese, mentally retarded Benny (Chuck Ellis), who actually looks nothing like the guy on the cover art pictured above. One of the guys has his throat ripped out and one of the girls is decapitated, sending Roxy and Frank scurrying in one direction and Cary and Sue (Patricia Christie) scurrying in another. The rednecks them begin hunting them down, using machetes, hooks and rope to take down their prey.

Nothing spectacular, the bickering cannibal clan grate on the nerves and it gets a little boring and repetitive about midway through, but this still has that pleasantly nostalgiac 80s direct-to-video feel to it that's going to appeal to some people. It's also far from the worst example of its type. The only person who seemed to move on to much else afterward was lead actress McKamy, who started making a name for herself in low-budget horror films (she also starred in DREAMANIAC, CREEPOZOIDS and EVIL LAUGH) before switching to hardcore adult features under the name Ashlyn Gere.

No official DVD release as of yet, though the film is available on some bootleg sites. Believe it or not, a sequel was recently announced.

As a 14 year old combing the video shelves, I rented this based on the bloody cover and discovered the first video horror film that truly disappointed me. There was nothing like the cover in the whole movie, quite frankly there was barely any blood at all. Having seen everything from Texas Chainsaw to Demons, I just expected more. The characters were annoying. The deaths were bloodless. Not only was it al shot outside but seemingly on the sunniest parts of the day, the picture completely washed out. The camerawork, as Fangoria's Doc Cyclops explained, "like an epileptic on a trampoline". The only positive thing one could take from this movie was that it's disaster may have helped Ashlyn Gere turn to porn, and in my later teens I would be very thankful for that. She was a goddess. This movie and Truth or Dare were the worst examples of 80's VHS cover art leading me horribly astray.