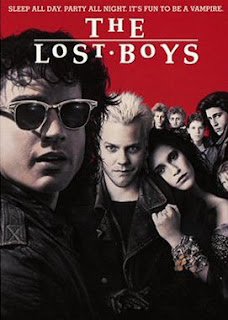 Directed by:
Joel Schumacher
Newly divorced single mom Dianne Wiest moves her two rebellious sons; teenager Michael (Jason Patric) and younger Sam (Corey Haim), to live with their grandpa (Barnard Hughes) in the quiet ocean side town of Santa Carla. It's not so quiet when Michael gets involved with the wrong crowd; some leather-clad bikers (led by Kiefer Sutherland) who turn out to be murderous vampires (and eternally youthful like the Peter Pan inspired title implies). Meanwhile, Sam strikes up a friendship with a pair of comic book-loving brothers (Corey Feldman as Edgar and Jamison Newlander as Alan) who know the town is infested with vampires and are eventually called in to help exterminate them. Mom also gets herself into a predicament of her own when she starts dating her boss (played by Edward Herrmann), who Sam suspects is also a vampire. It's well-budgeted and flashy, and was very popular during its day; wisely marketed directly toward an 80s teen audiences ("It's fun to be a vampire") just getting into MTV-like stylistics. An immediate sequel was even planned and scripted, but never happened. The good news is that it has aged pretty well over the years and little of the shimmer has diminished. The bad news is that it strives so hard to be hip and witty that much of the actual horror becomes lost in the shuffle, something the bloody finale eventually tries to make up for.

The soundtrack (including the theme song "Cry Little Sister" by Gerard McMann and covers of "People Are Strange" by Echo and the Bunnymen and "Don't Let the Sun Go Down on Me" by Roger Daltry) is pretty great. So are the makeup and special effects from Greg Cannom, Steve LaPorte and Ve Neill. Camerawork is effective with stylish cinematography and very good use made of wide angles. The cast is also good. I'm not a big fan of the Corey's, but they are both pretty good here. Wiest is great (as usual), Sutherland is effectively menacing and charismatic as the chief vampire and Hughes (in a role originally intended for John Carradine, who was too ill to play it) all but steals the film as the spirited grandpa. Followed by a terrible direct-to-DVD sequel - LOST BOYS 2: THE TRIBE - in 2008.
★★1/2
Posted by The Bloody Pit of Horror at 4:55 PM

Email ThisBlogThis!Share to TwitterShare to FacebookShare to Pinterest
Labels: vampire