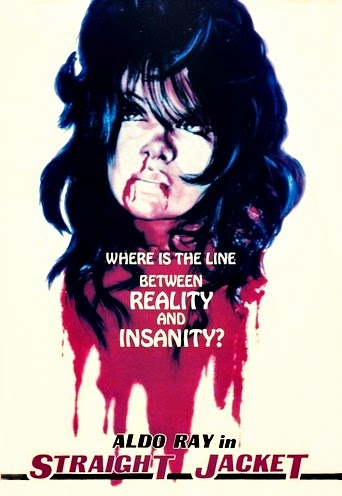 
A friendly insurance salesman (Chuck Jamison) and his recently de-institutionalized alcoholic blonde wife (Kory Clark) move into a new house in Los Angeles. She has bloody visions of an axe murderer and severed body parts lying around the house, but is it all in her head? Turns out that the same house was a former murder site and the killer was never found. Hmmm. This extremely obscure film (not to be confused with the Joan Crawford film Strait-Jacket, which is actually good) includes a slew of ridiculous suspects, including a balding, sweaty gardener who crushes snails in his hand, a nosy neighbor inspired by Ruth Gordon's character in Rosemary's Baby, her fat slob / pervert husband, a guy at a nuthouse and guest star Aldo Ray as a "retired" cop Larry Craig, who had similar visions of the house when he investigated the original murders. There's a pinch of low-budget charm in this rock-bottom budgeted chiller (also out on video as Dark Sanity), but it' slow moving, poorly made and pretty boring for the most part. Some videos say it was made in 1982 or 1987, but the actual production year was 1978. There are rumors that the director and producers skipped town and never paid any of the actors. Seems to be a common occurrence with these low budget regional horrors. Get your money up front, people!